Microfluidics for Cell Culture and Analysis

From the initial vision of re-creating entire chemistry laboratories on chips, microfluidics has evolved into niche applications for cell culture and analytical science.

Microfluidics began in earnest during the late 1980s, when academic groups at the University of Delft (Netherlands), ETH (Zurich), and Oak Ridge National Laboratories (Oak Ridge, Tennessee, USA) were investigating micro-total analysis systems, or laboratories on chips. Borrowing fabrication techniques from the semiconductor industry, these groups used microchannels to manipulate the movement of chemical solutions through silicon chips. At the time, precision-machined high-quality silicon was less expensive than glass or plastic, and it was believed that the structural and semiconductor properties of silicon might be exploited to create sensors, actuators, and separation modalities within the chip. But before long labs-on-chips (LOCs) were created in glass, and today polymer polydimethylsiloxane (PDMS) is the most popular substrate. 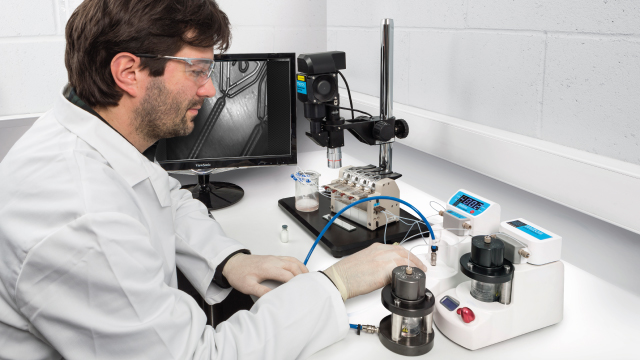 MORE INFORMATION
For the past 30 years research groups touted their “XYZ-on-a-Chip” devices, where “XYZ” is a place-holder for liquid or gas chromatography, electrophoresis, and even mass spectrometry.
In many respects these devices remain science projects. Quality control, reproducibility, reliability, and availability are nowhere near what one would expect in a commercial instrument. Also missing in many cases are systems suitable for sample introduction and, most importantly, for readouts and data manipulation.
For these reasons today’s commercial implementations of LOCs or micro-analysis systems employs the chips as front ends or sample preparation devices for more-or-less conventional instrumentation. Agilent Technologies’ 2100 Bioanalyzer, for example, is a multi-assay system that uses, for one group of assays, a DNA LabChip microfluidic chip for sample preparation. Analytes pass from the chip to a much larger reader, where relevant data is processed as in macro-scale electrophoresis instruments.

Due to its reliance on sample preparation, reagents, and discrete process steps PCR is an excellent candidate mode for analysis in micro-scale channels and wells. For example Thermo Fisher Scientific offers the Custom TaqMan® Array Card, a 384-well microfluidic card for real-time PCR reactions.

The Naica PCR system, from Stilla Technologies (Villejuif, France) goes one better with Crystal Digital PCRTM, a proprietary technology developed with researchers at France’s Ecole Polytechnique and reported in the journal Biomolecular Detection and Quantification in 2016.

At the heart of the system is the Sapphire chip, a microfluidic device based on work by Dr. Rémi Dangla of Ecole Polytechnique (Palaiseau, France) on droplet formation using gradients of confinement. Microfluidic devices were previously shown to generate microdrops through application of hydrodynamic forces. Investigators have used these droplets as microreactors for chemistry and cell culture. Dangla’s work showed that droplets could also form through the application of height variations to immiscible fluids. Droplets thus formed self-propel under the influence of curvature imbalances, not fluid movement.

Within the sapphire chip, samples of extracted nucleic acids plus reagents partition into tens of thousands of sub-nanoliter droplets, collect in a central chamber, and self-organize into a 2D monolayer array. 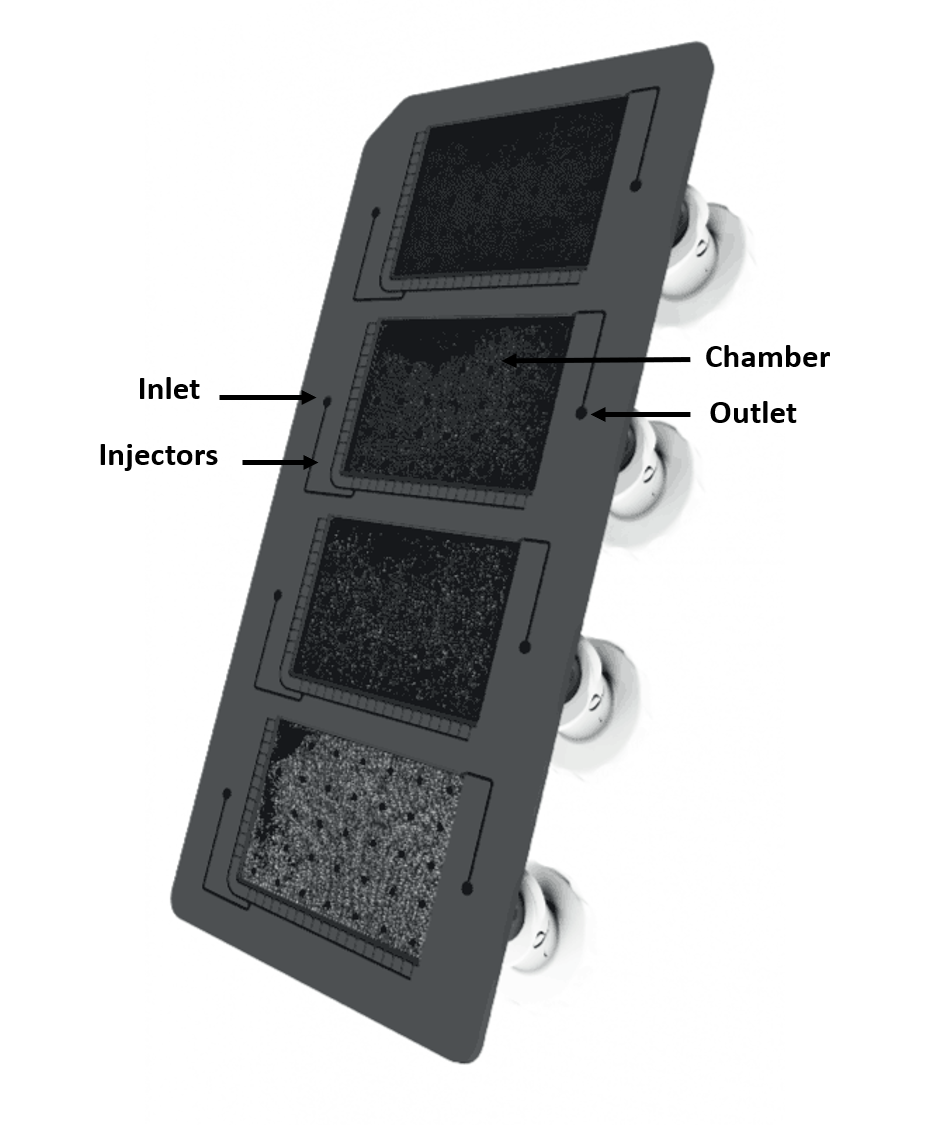 At this stage, the Sapphire chip undergoes temperature cycling to achieve DNA amplification and RNA analysis through PCR, as well as whole genome amplification. Stilla uses a fluorescence reader to quantify signals from three channels, and proprietary software to obtain concentration readings.

“Digital PCR does not exactly replace traditional real-time PCR,” notes Magali Droniou, PhD, Stilla’s Applications Director. “But it affords unprecedented access to information contained within the sample, especially when very low levels are present within complex samples, for example circulating tumor DNA in liquid biopsies. When present at less than one percent of total DNA, only digital PCR can detect circulating tumor DNA.”

Thanks to the microfluidic design and handoff of droplets from one analysis stage to the next, human manipulation is reduced to a single sample pipetting step, therefore no user bias for this embodiment of digital PCR.

“The Sapphire chip allows direct visualization of the 2D monolayer array, which we call a droplet crystal, hence the term Crystal Digital PCR,” Droniou adds. “This is extremely useful for assay optimization, to check directly what could have gone wrong, for example if droplet integrity was compromised or if the sample contained detergent.”

Analytical systems involving such small volumes always come with tradeoffs. “Some users requiring a higher throughput may find the standard set-up of the Sapphire chip to be somewhat limiting,” Droniou says. Stilla is addressing this concern through development of a new chip with a larger number of chambers.

In mid-2017 two research groups, one from a California university consortium and another from the New York Genome Center, reported on droplet microfluidic-based methods for sequencing genomes of single cells. The California paper, in Nature Biotechnology, focused on cells harvested from environmental samples while the latter described characterization of cells from rheumatoid arthritis patients.

Both teams employed droplet microfluidics, which traps genes but allows reagents and small molecules to pass through the barrier. The Californians used hydrogel microspheres, which allowed capture of single microbial cells, washing, and purification of DNA. Droplets are merged, processed, and sequenced on an Illumina sequencer. Sequences were compared to a reference standard of ten microbes typically found in the environment.

The authors, harking back to early microfluidic work in silicon chips, call their device “in silico cytometry, or Si-C. While the authors are hopeful that similar methods will eventually become more reliable, they are cognizant of its limitations.

As with any identification system based on genomics, microbial identification is only as good as the match between samples and reference organisms, and how reliably the instrument or method can identify that match.

More specifically, they write that “while the number of cells sequenced far exceeds currently described methods, the coverage per cell is substantially lower.  Therefore, dropouts in coverage and false negatives can be expected in in silico cytometry analysis.”

The authors note that while their focus was on environmental organisms, “SiC-seq is also applicable to populations of mammalian cells, where it can have a more direct impact on human health.”

Which is precisely where the New York group focused. They used 3D printing to create a microcontroller for microfluidic droplet sequencing chips, at a cost of less than $600 for parts and components. Lead researcher Rahul Satija, at New York University, had previously demonstrated a microfluidic device for massively parallel single-cell RNA sequencing through a device, named Seq-Well. Satija had sequenced individual macrophages exposed to pathogenic bacteria, before the work described here on cells associated with inflammation in arthritic joints.

Microfluidic applications in cell culture and analysis took longer to realize than for chemical analysis, but their potential is greater. The major advantage of “chemical” LOCs, even those operating with biomolecules, is conservation of samples and reagents, and minimization of disposables. While developers also stress automation and speed, their devices generally don’t accomplish significantly more in those areas than conventional, e.g. microtiter-scale, analysis platforms.

The broader significance of “cell culture” is more apparent in microfluidic devices than in large culture vessels or even microtiter plates. Whether the end-process is an assay, production of a protein or chemical product, or cells themselves as products, culturing represents a transitional step. In other words, the culturing phase is more a stopover than a destination.

Organs-on-chips, the development-stage recapitulation of human tissues on glass or plastic substrates, is a favorite topic at Technology Networks (see here, here, and here). The devices consist of tiny wells or compartments, populated by single- or multi-cell cultures which receive nutrients through microfluidic channels.

Organ and tissue chips are so popular that more traditional microfluidic chip prototyping firms now offer designs and services around cell-based chips. Even the U.S. Food and Drug Administration is interested, announcing early in 2017 a multi-year collaboration with Emulate, Inc., which describes itself as a “human emulation” company, on chip-based models of liver disease.

Despite their attractiveness as potential disease models, organ-chips are, operationally and scientifically, more complex than assays conducted with suspended or adherent cells in microwells. Only time will tell if the devices truly emulate human organs and systems sufficiently well to replace animal and human drug testing, or if the results obtained in them sufficiently recapitulate the human physiology.

Devices that manipulate and analyze cells represent the other side of cell-centered microfluidics. Instead of creating an entirely novel disease model paradigm, these chips rely on established analytical science such as fluorescence, gene amplification, and sequencing, while relegating microfluidics to the mechanical manipulation of target cells.

In his review of microfluidic cell culture in PDMS, Prof. Ronan Fleming at the University of Luxembourg notes that in addition to the usual benefits of operation in tiny volumes, chip-based cultures permit isolation of individual cells within defined microfluidic regions. Moreover, the polymeric substrate is (at least theoretically) inexpensive and provides a great deal of flexibility in terms of experimental design.

On the negative side controlling the location of cells can be challenging, and cells must adapt to a culture surface to which they are likely unaccustomed. Moreover protocols, reagents, and media may require adjusting compared with batch macro cultures and scaleup, even to microwell devices, is unpredictable. While volumetric differentials alone might account for inconsistencies at various scales (as they often do for standard cell culture), the major advantage of microfluidics -- experimental freedom -- comes at the price of nonexistent standardization for chips and external controllers.

Fleming provides solid advice for groups contemplating a foray into microfluidic cell culture. First, he recommends thoroughly evaluating the compatibility of the microfluidic chip with proposed cells and media: cells should thrive, and nothing should absorb into the substrate or leach out. Second, media and feed need to be adjusted relative to values in batch processes, even those conducted in microwells. What works on the macro scale often does not on the micro scale.

Finally, noting the multidisciplinary nature of microfluidics, Fleming advises developers to seek out new skills and expertise: “Biochemical researchers should have strong ties to experienced engineers if they hope to successfully enter the field of microfluidic cell culture. This being said, if cell biologists are aware of the intrinsic factors that differ between macroscopic and microfluidic cell culture, the latter nascent field has the potential to be used to investigate many hitherto under explored aspects of cell biology.”

Complete the form below to unlock access to this Audio Article: "Microfluidics for Cell Culture and Analysis"