In a move away from the previous belief that cell populations are homogeneous and display identical molecular characteristics, increasingly scientists are turning their attention to the study of single cells and the differences between them. Acknowledging this heterogeneity between cells is seen by many as key in identifying small but critical variations that can affect biological processes, variations that may be missed when measuring bulk averages of cell populations. This could be of particular importance when working with rare cells such as circulating tumour cells (CTCs) to ensure a complete picture of the disease is captured.

The value of studying CTCs

Estimates suggest that over 90% of cancer deaths are attributable to metastatic disease. CTCs, which are cells that detach from a solid tumour and spread through the bloodstream and lymphatic system, are thought to play a role in metastasis, and the subsequent development of secondary tumours.  They are therefore promising multifunctional biomarkers, which could help inform the diagnosis, prognosis and treatment options of cancer patients.

A number of studies have shown an association between CTC counts and cancer prognosis.  Research published in 2004 demonstrated that breast cancer patients with fewer CTCs had a longer overall survival than those with higher counts. Similar findings have been found for other cancers, including ovarian, prostate and bladder. The less invasive nature of liquid biopsies compared to tissue biopsies, also means that CTCs can be analysed on a serial basis, which can be useful in monitoring therapeutic responses and the development of drug resistance, helping to fuel the move towards personalized medicine. 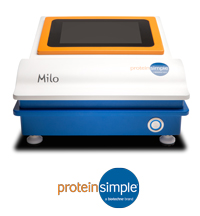 The Milo Single-Cell Western platform measures protein expression in thousands of single cells in a single run so you can profile heterogeneity in your samples.  Named the top innovation of 2016, Milo uses conventional western antibodies to simplify phospho-flow studies and give protein validation of your single-cell RNA data.

The challenge of studying CTCs – Finding a needle in a haystack

Despite the potential CTCs offer for advancing the diagnosis and treatment of cancer patients, their capture and analysis can be challenging. The first hurdle to overcome is the isolation of these rare cells; with only around 5-50 CTCs per teaspoon of blood, isolation methods must be highly selective and sensitive.

The second main challenge is the extensive heterogeneity of CTCs. Subpopulations differing in phenotype may not be representative of the primary tumour, or may go undetected, this could result in inaccurate results or inappropriate treatment selection. There is therefore a need for sensitive single cell methods which can accurately analyze genomic and proteomic information from individual CTCs.

The growing use of microfluidics in single cell isolation

There are currently a number of technologies available to isolate single cells such as CTCs, including flow cytometry, FACS, micromanipulation, laser microdissection, and microfluidic devices. The latter are a particularly attractive option, due to their high throughput ability, possibility of integration, low cost, and small sample and reagent volumes needed.

Isolation of single cells relies on exploiting either differences in the physical features of the cells, such as size, deformability, optical properties and inertia, or biochemical properties, such as the presence of EpCAM and other cell surface markers, with the use of microfluidic devices being demonstrated in both these approaches.

CTCs are typically larger than white blood cells, a feature which several microfluidic devices have exploited to isolate them from blood samples. One size-based isolation approach involved the use of a label-free spiral microfluidic device to create hydrodynamic forces that could rapidly isolate CTCs from blood. In addition to being cheap to produce, the system showed over 85% recovery of spiked cells. Similarly, an acoustic-based microfluidic device was developed which could effectively separate CTCs from white blood cells based on size and density differences between the cells. Acoustic-based methods such as this have the advantage of being label-free, contactless and less damaging, enabling further culture and downstream analysis of the cells. While methods such as these work well for cells that vary significantly in size, they can be less effective when the cells are more physically similar.

Microfluidic devices such as the CTC-Chip, instead work to exploit the biochemical differences between the cells. Hosting a series of 78,000 μm-sized posts, coated with antibodies to epithelial cell adhesion molecule (EpCAM), the CTC-Chip captures CTCs from blood as it flows through the chip. Importantly, this method maintains viability of the cells, enabling further downstream analysis, which can be a problem with some affinity-based isolation methods. The significance of maintaining a high level of viability has been met with the development of technologies that enable easy detachment of captured cells such as the use of a chemical-ligand exchange reaction, and aptamers, which require no sample pre-treatment, allow more gentle release, and subsequently result in less damage to the cells. However, some issues may remain with affinity-based methods; namely how to confidently choose which surface markers to look for, and missing cells which have undergone epithelial-mesenchymal transition.

To overcome the limitations of measuring the average of a population and identify heterogeneity in a sample, several microfluidic methods are being developed which enable the genomic, transcriptomic and proteomic analysis of cells such as CTCs to be conducted at the single cell level. Two similar methods developed in 2015, inDrops and Drop-seq, achieve this by genetically barcoding the cells, enabling the gene expression of single cells to be measured simultaneously. Both methods use microfluidic devices to co-encapsulate cells and tiny beads which deliver DNA barcodes into droplets, and enable higher throughput and lower costs than previous technologies.

A similar droplet barcoding approach has recently been developed for single cell protein profiling. Abseq detects and quantitates proteins in single cells using specific antibodies which have been labelled with DNA tags. The main advantages of this approach are that low-abundance tags (theoretically a single antibody per cell) can be amplified and detected, and multiplexing is possible. An alternative approach which enables multiplexing was published recently in Nature Communications, which details a microfluidic single cell resolution western blot which can measure multiple protein targets in individual CTCs. This approach could lead to increased identification of CTCs and aid personalized cancer medicine, whilst overcoming challenges such as the sample loss seen with other methods.

Looking to the future

With continued developments in microfluidic technologies, it is likely that the use of these devices will become more commonplace in the isolation and analysis of rare cells such as CTCs. It is hoped that learning more about the properties and characteristics of these cells could lead to improvements in the detection and treatment of cancer, and one day enable a truly personalized approach for patients.

Complete the form below to unlock access to this Audio Article: "Microfluidics for Single Cell Analysis of CTCs "