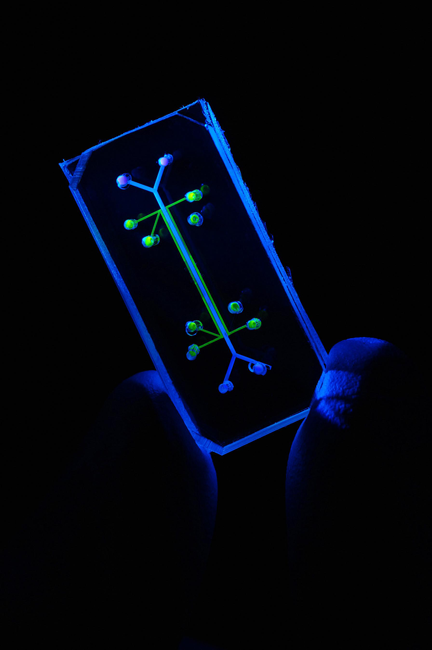 Developed by Prof. Huh at the University of Pennsylvania, this human breathing lung-on-a-chip
enables researchers to mimic the functional units of the human lung.

Many years ago the quest for physiologically relevant in vitro testing of toxins, foods, vitamins, drugs, and chemicals led to cell-based assays, which became more informational with the emergence of advanced fluorescence and chemiluminescence labeling. Eventually plated and suspended cells led to membrane- and substrate-based cultures, and finally to three-dimensional cultures. Organs-on-chips are based on patterned 3D monocultures or co-cultures, with the added feature of microfluidics to provide nourishment to cells while removing metabolites.

Up from Cell-Based Assays

The evolution from simple cell-based assays to organs-on-chips illustrates how each stage of development adds practical functionality.

Simple membrane-based cultures have been around for about twenty years and have been quite successful as tissue analogs. Some, like MilliporeSigma’s (Billerica, MA) Millicell® membranes, are available in convenient 96-well formats. “Millicell has quite successfully modeled barrier layers such as endothelia, which exist as a single plane of cells with tight junctions in between,” notes Philip Lee, Ph.D., who heads Cell Culture Systems Marketing at MilliporeSigma. Applications include drug screening and endothelial permeability testing.

Because they include an additional spatial dimension, 3D cultures (including organs-on-chips) interact more intimately with matrix materials than 2D cultures. Thus the importance of matrix compatibility with specific cells. Various natural and synthetic materials, in a variety of configurations, have been employed as 3D culture matrices.

“Additionally, getting the mass transport right in 3D cultures is key because cells in spherical or multi-layered configurations will quickly starve themselves and die,” Lee says. This is achieved to an adequate degree in organs-on-chips through microfluidics.

Cell options for organs-on-chips include immortalized cell lines, harvested primary cells, and primary cells derived from induced pluripotent stem cells (iPSCs). Immortalized cells are the hardiest and easiest to culture, but since they are abnormal they may not provide optimal physiologic relevance. Primary cells harvested from organ donors usually provide the desired physiologic relevance but their supply is uncertain, and their behavior varies depending on the donor’s health status.

Cells derived from stem cell lineages practically eliminate supply, quality, and uniformity concerns, but newly differentiated cells do not always respond the same as mature primary cells. iPSC-derived primary cells have been the most successful in drug discovery screens, where perfect organ models for toxicity and efficacy are not always needed.

“The reality is that not all cells behave the same in 3D culture,” Lee says, yet organ-on-chip and 3D cell culture research groups lack a clear-cut consensus on which cells are best. For cultures mimicking normal cells such as gut, lung, and heart, the current trend is to begin with iPSCs and differentiate them into somatic cells, which according to Lee “strikes the right balance between cell accessibility and elevated physiologic relevance. But questions remain regarding a future gold standard.”

CN Bio Innovations (Hertfordshire, UK) specializes in liver models through its LiverChip® platform. In one embodiment the device, Quantum B®, recapitulates the full viral lifecycle of hepatitis B. In additional configurations LiverChip mimics hepatitis C and malaria, and serves as a standard for toxicology and metabolism studies.

Dr. David Hughes, Chief Technical Officer, notes that hepatocytes require precise expertise and handling because they rapidly lose function in 2D cultures. “Since they do not proliferate in culture there’s been a lot of interest in keeping primary hepatocytes functional for longer.”

CN Bio has used a variety of cells for its organ models, but today works almost exclusively with human primary cells.

The company’s organ-on-a-chip employs a bi-directional micropump that pulls hepatocytes into a microporous polystyrene scaffold.  After cells adhere to and populate the scaffold the pump reverses direction to supply cells with nutrients and oxygen. Hepatocytes survive for at least forty days within the device.

LiverChip gets interesting when hepatocytes are co-cultured with additional cell types. Hepatocytes are parenchymal liver cells, meaning they are the primary functional unit. CN Bio also uses non-parenchymal cells that provide additional functions and better approximate organ biology  . One such model incorporates Kupffer cells, which are resident liver macrophages. “Together, the two cells offer a model that looks more like an immune-competent liver rather than just the hepatocytes that represent metabolic function,” Hughes tells Technology Networks, “because co-cultured cells affect each other’s function.”

Parenchymal cells are the basis of the “breathing lung on a chip” designed by Dongeun (Dan) Huh, Ph.D., Professor of Bioengineering at the University of Pennsylvania (Philadelphia, PA). Huh’s device mimics the interface between microscopic alveolar air sacs deep in the lung and surrounding capillaries that enable gas exchange.

Drawing on manufacturing techniques developed by the computer industry, Huh fabricates plastic microchips containing cultured human lung and capillary cells on opposite sides of a thin elastomeric membrane of poly-dimethylsiloxane, a material used to manufacture contact lenses. “The design allows us to expand and contract the membrane and cells attached to it to mimic breathing motions,” Huh says.

Huh has infected cells on the “lung” side of the device with bacteria, and immune cells on the capillary side. Under signaling influence from infected cells the immune cells eventually stick to the capillary tissue, transmigrate across it, and enter the alveolar compartment where they engulf the bacteria to clear the infection. “The model mimics complex organ-level functions, not just tissue-specific functions.”

Huh mostly uses primary human cells harvested from cadavers, which he expands through several passages. After growing in conventional cultureware cells are detached, suspended in culture medium, and injected into microfluidic channels. Huh published a proof of concept paper in Science five years ago and has constantly improved on his model. Other successes from the Huh lab include a blinking eye on a chip, placenta-on-a-chip, breast cancer-on-a-chip, and lung models for pulmonary fibrosis and asthma. The asthma model is particularly relevant since asthma does not develop naturally in animals, a fact that has hampered asthma drug testing.

Lung on a chip is compatible with a wide array of assays, including immunofluorescence for cell responses and antibodies for measuring the expression of biomarkers or cell-specifc markers. Huh can collect outflow from the device to measure secretory products including cytokines, chemokines, hormones, growth factors, and metabolites, or detach cells and analyze them outside of the device. “We’re not married to any specific assay,” he says.

3D cell printing is mostly associated with  regenerative medicine but the University of Swansea, Wake Forest School of Medicine, and companies like BioBots and Organovo have adopted the technique to create organ models. 3D cell printing involves placing cells into a device similar to a 3D printer and depositing them onto defined structures layer by layer. Cells eventually fuse into tissue-like structures that replicate the functions of actual tissues.

The advantage of bioprinting over 3D cell culture or organs-on-chips is the elimination of biomatrix materials. “When we create a tissue it’s a hundred percent cellular, with no foreign material present,” says Keith Murphy, CEO of Organovo (San Diego, CA). “There’s a higher fidelity to actual tissue, as opposed to getting cells in approximate proximity and hoping they behave as desired.” 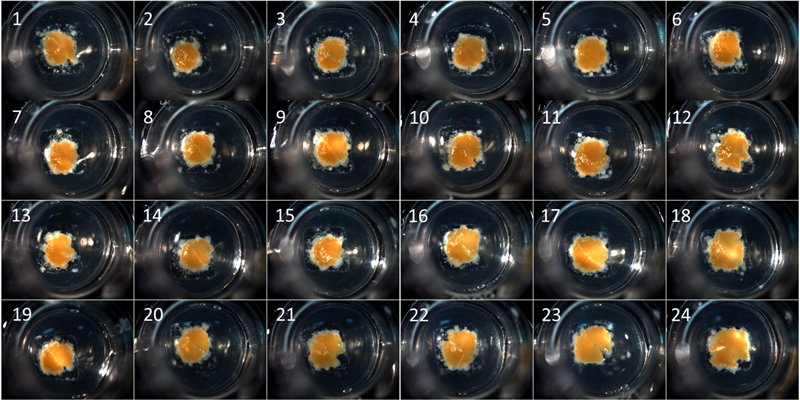 Organovo’s bioprinting process can be tailored to produce tissues in a variety of formats, including these micro-scale tissues contained in standard multi-well tissue culture plates for drug testing.

Organovo began its business with a cell deposition system that induced shear forces that killed too many cells. They now use a technique developed by company cofounder Dr. Gabor Forgacs, from the University of Missouri, which uses larger-diameter jets and lower flow rates, which creates almost zero shear and close to a hundred percent cell viability.

Where conventional tissue engineering first creates a scaffold then reproduces biological activity, bioprinting begins at the other end of the spectrum, by first re-creating biological fidelity and then size/structure. 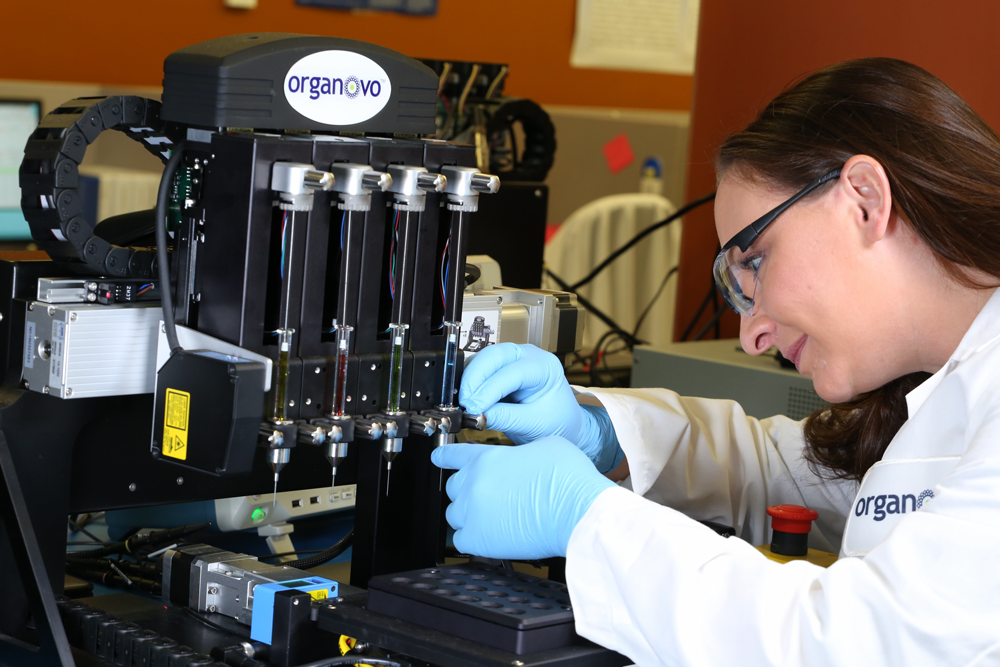 One limitation shared by 3D cultures and organs on chips is the lack of true vasculature. “Keeping the cells alive inside complex tissue models remains an issue,” Murphy notes. “Some advances have occurred, but nobody can reproduce a circulatory system that oxygenates and nourishes all cells within these models.”

According to Dan Huh, barriers to developing more functionally relevant organs on chips, and acceptance of these models, are depend on obtaining cells suited to the task, using appropriate materials, and performing robust validation.

Primary human cells work best but their supply and quality are unpredictable, depending to a large extent on the harvesting technique, the cells’ age, and the health status of the tissue donor. Matrix materials can affect small-molecule drug screens because many polymers absorb small molecules, and thus affect drug concentrations, which may skew assay results.

Ultimately, industry will broadly adopt organs on chips only if the devices have been validated against accepted animal models. Huh’s original Science manuscript received unfavorable reviews because he did not supply validation of his model’s physiological relevance. Addressing this concern required that he repeat some key experiments in an animal model to corroborate his in vitro findings.

CN Bio’s David Hughes also warns that while organs on chips achieve complexity through co-culture and matrices, they are still above all imperfect models. “They lack all the functions of organs. The key to using them properly is understanding what they can do.”

Then there are the serious doubters.

Martin Yarmush, M.D., Ph.D., who directs the Center for Engineering in Medicine at the Massachusetts General Hospital, has been an organ-on-a-chip pioneer. Among his successes are several complex multicellular systems like brain-on-a-chip, allergy-on-a-chip, and liver-on-a-chip. Yet he believes “on-a-chip” technology is not ready for prime time. “This field has become over-blown in terms of what it can reliably deliver near-term. In addition, some developers will have you believe that organs-on-chips are solutions for problems that they are not designed to solve.”

Dr. Yarmush refers to DARPA’s, NIH's, and FDA’s human body-on-a-chip initiative, as “a bit of a fairy tale given their milestone-based approach, which does not work well for research-based systems where individual components are not as yet well developed.” These agencies poured approximately $130 million into the project, of which $37 million went to Harvard’s Wyss Institute. One major goal was to connect ten microarrayed “organs” on a chip to mimic human physiology.

No significant news has appeared on the project since early 2015, and it seems that DARPA will be getting out of the business relatively soon.

One of the attractions of organ-on-a-chip technology is the potential identification of pharmaceutical compounds destined to fail in the clinic as early as possible during drug development, and preferably before human studies are initiated. “But many of those drug failures do not occur because we lack a human-on-a chip platform,” Yarmush explains. “Compounds often fail because of idiosyncratic reactions or because safety signals do not appear in preclinical studies, nor in clinical phases 1 and 2 involving small numbers of subjects. Cautionary results that do not show up early because of the small study populations may suddenly emerge in phase 3 and/or after market approval. A human-on-a-chip will not predict these occurrences. Now, if we had 300,000 humans-on-chips it would be a different story, but a bigger fairy tale.”

“The human relevance of these systems is also an issue to consider and vet carefully. The Wyss Institute developed a lung-on-a-chip platform that they claim is useful in identifying IL-2-induced pulmonary edema. Their data suggest that, with their lung-on-a-chip system, IL-2 acts directly on epithelial cells creating gaps that are enlarged with mechanical strain, compromising the barrier and leading to what would seem to be edema.” Yet perusal of the literature suggests that this physiologic model is specious. “It seems like these investigators have created a system reporting a phantom disease mechanism, and have subsequently convinced drug companies to invest in it.”