Anna is a science writer at Technology Networks. She holds a first-class honours degree in biological sciences from the University of East Anglia, before joining Technology Networks she helped organize scientific conferences.
Learn about our editorial policies
Credit: Samiksha Nayak
Read time:

Complete the form below and we will email you a PDF version of "Smartphones: Making Diagnostics Mobile"

Since the introduction of the first iPhone in 2007, smartphones have transformed many aspects of society, changing the way people communicate, shop and access entertainment. With an estimated 44% of the world population owning one in 2017, smartphones boast a wide global presence, a presence which is expected to increase to reach 2.87 billion users in 2020. Whilst current users are mainly concentrated in the developed world, adoption rates are growing globally, with the number of smartphones nearly doubling in Africa over the last two years.

Comprised of powerful computational units and numerous internal sensors, the abilities of these affordable devices are ever growing, and so too are their range of potential applications. According to Daniel Joh, an MD-PhD student in the Chilkoti Group at Duke University, “The widespread dissemination of phones, their user-friendliness, computing power, and ability to transmit results to healthcare professions (via WiFi or cellular connection) make them an attractive platform for point-of-care diagnostics.”

One area of healthcare in which smartphones have shown particular promise is HIV management. The majority of people living with HIV are in developing countries, with around 69% (25.6 million) in sub-Saharan Africa alone. Access and quality of healthcare in these regions can often be limited, so there is a need for a portable, low-cost and simple way to detect and monitor HIV. 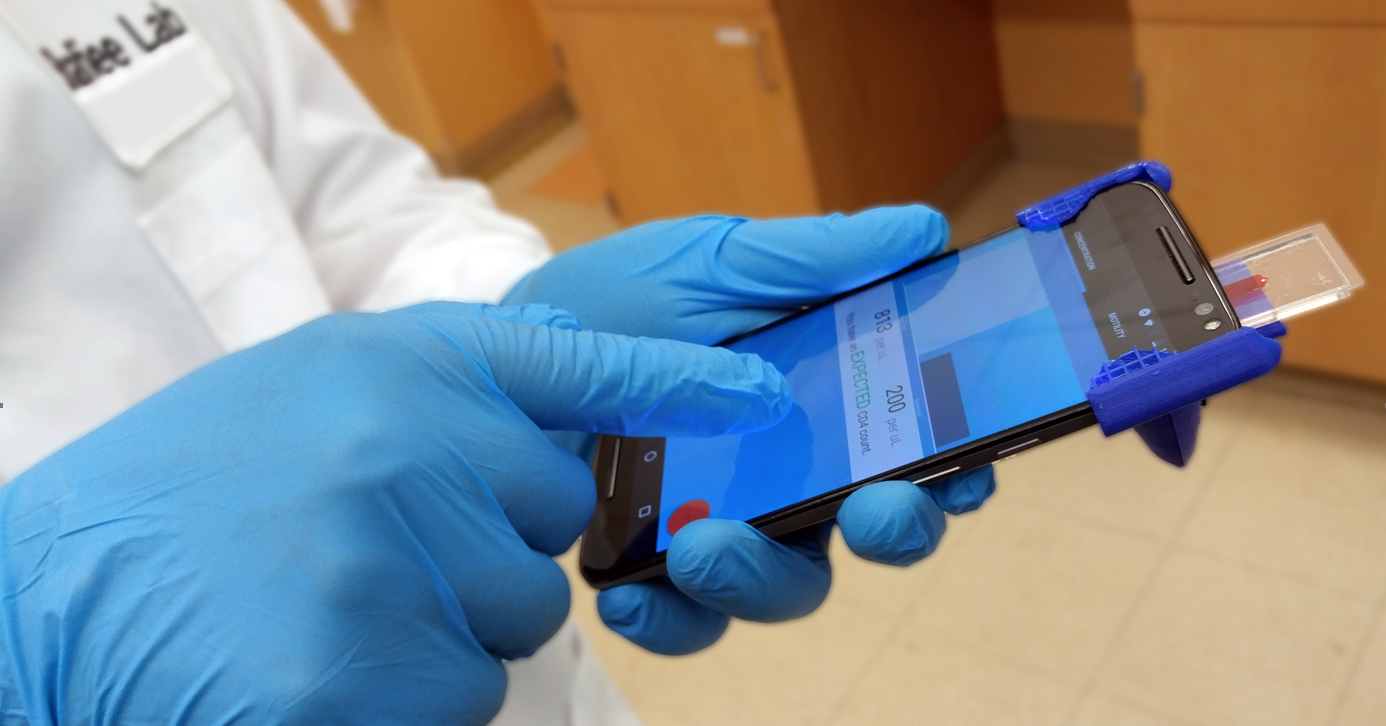 Working to address this need, researchers from Brigham and Women’s Hospital (BWH) have recently developed a rapid, low-cost CD4 counter by integrating advancements in consumer electronics and microfabrication. Although recent WHO guidelines emphasize viral load testing for HIV management, Dr. Hadi Shafiee, Assistant Professor at BWH, notes that “point-of-care CD4 testing is still an important component of disease management in developing countries.” With estimated manufacturing costs of less than $2 for the microfluidic device and less than $5 for an optical smartphone attachment, the CD4 counter produces results comparable to the gold standard—flow cytometry—at a fraction of the cost. Additionally, there is no need for a power outlet or refrigeration, making the device well suited for use in remote regions.

Antenatal screening is another area of healthcare that smartphone-based devices have the potential to improve in developing countries. In 2015, the Sia Lab at Columbia University developed a smartphone dongle capable of detecting HIV and syphilis in pregnant women in just 15 minutes, with the goal of reducing adverse effects of the diseases in both mothers and infants. Several features make the device well suited to use by community healthcare workers, including complete portability, pre-loaded reagents, and an accompanying app to guide the user and provide an objective readout of the results.

Speaking about field trials of the device in Kigali, Rwanda, Samiksha Nayak, PhD Student in the Sia Lab commented that “healthcare workers who had no previous experience in running conventional ELISAs were able to use our device after a short 30-minute training period. We obtained results that rival state-of-the-art laboratory testing and were also able to get some preliminary feedback from both patients and health care workers. 97% of patients said they would recommend the dongle because of its fast turn-around time, ability to offer results for multiple diseases, and simplicity of procedure. The smartphone platform allows us to leverage an extremely powerful interface for data processing, communication as well as training and education.”

Several other smartphone compatible devices have also demonstrated opportunities to simplify diagnostic workflows and reduce dependence on infrastructure compared to laboratory-based tests. The recently developed D4 assay, a self-contained immunoassay, can help to overcome some of the challenges that ELISA can present in point-of-care settings. “The ‘non-fouling’ POEGMA surface coating used in our assays virtually eliminates background nonspecific binding, and removes the requirement for blocking, multiple wash steps, and sample pre-processing steps. Furthermore, the D4 contains all necessary reagents on-chip, such that the addition of blood drives the assay to completion – this greatly simplifies assay workflow,” says Daniel Joh. The device is also affordable, with estimated costs of less than a dollar for the D4 chips and around $30 for the 3D-printed mobile phone attachment.

“While our results are proof-of-concept and the platform requires further development, the potential impact of this technology is the possibility of expanding access to high-performance immunoassays for clinical decision-making in areas with limited clinical infrastructure” Daniel adds.

Another ground-breaking smartphone-based device is the TRI Analyzer, a spectral transmission-reflectance-intensity analyzer, recently developed by Professor Brian Cunningham and a team of researchers at the University of Illinois at Urbana-Champaign.  “The TRI Analyzer represents the first handheld mobile device that is capable of performing three of the most common types of assays that are used in medical diagnostics, environmental monitoring, food safety, animal health, and many others,” Professor Cunningham tells us. Uniquely, the device “uses the internal camera and flash LED of a smartphone to perform spectroscopy that quantitatively measures the color absorption, color emission, or color reflection from biological assays.” The system also “interfaces with a cartridge that contains a sequence of small liquid compartments that are ‘read’ by swiping the cartridge through the reader (in the manner of swiping a credit card), so our system can integrate experimental controls, replicate tests, and multiple tests for different analytes that provide robustness for the data,” adds Professor Cunningham. 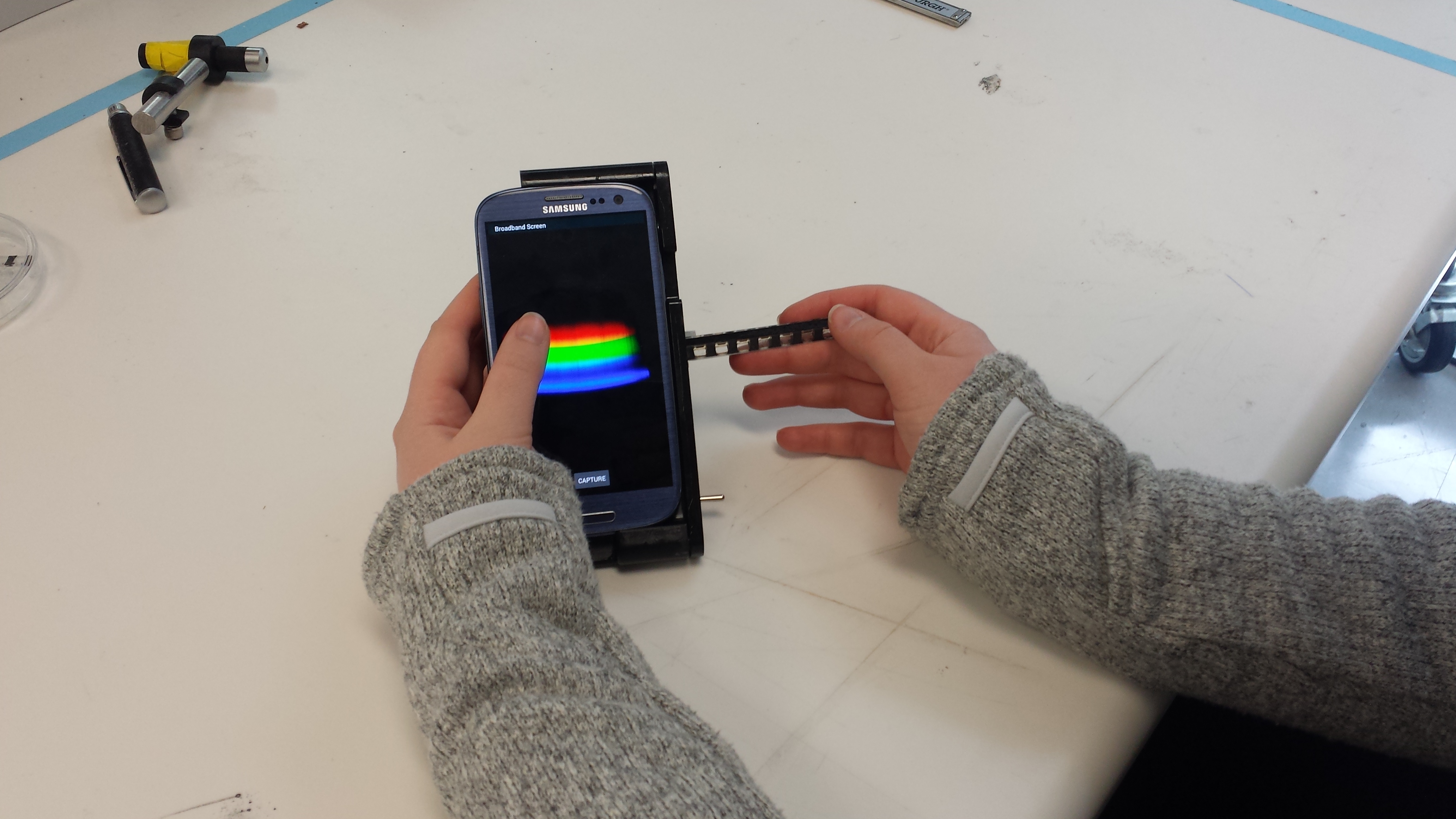 The challenges of creating smartphone-compatible assays

Despite the versatility of smartphone-based diagnostics, their development doesn’t come without challenges. Dr. Shaifee notes that “one of the major challenges in making smartphone compatible devices, is their rapidly changing design and thus future proofing.” He adds that “bringing proposed ideas of medical devices to the market is a highly regulated process. It takes many years for most devices to meet all of the rigorous requirements, and some get lost in the transition. On the other hand, smartphone technologies evolve rapidly. Keeping up with new device designs is a constant challenge. Making a device that performs similarly across multiple devices could be a challenge.”

This point seems a common issue, with Professor Cunningham telling us that one of the challenges of creating the TRI Analyzer “was designing our system so it could be easily adapted to many types of smartphones through minor modification of the cradle, rather than a full optical re-design.” Additional challenges faced included how “to access the detailed operating functions of the smartphone internal camera so we could analyze raw, unprocessed data from the image sensor,” and “generating a highly-functional and easy-to-navigate user interface.”

It seems that smartphones certainly have the potential to have a profound impact of the future of diagnostics. More affordable and robust devices could help to take diagnostics further to the point of need in resource limited areas. The range of diseases that smartphone-based diagnostics can help to detect is likely to continue to grow, along with their sensitivity. Despite observing reductions in sensitivity and inter-assay consistency when transitioning the D4 assay from tabletop to smartphone, Daniel Joh tells us that “as smartphone-based imaging and sensing platforms continue to evolve, we expect their performance to eventually rival that of tabletop scanners.”

Also on the horizon is “a sensor that is small and inexpensive enough to fit inside the body of a smartphone, enabling it to have a ‘science camera’ for a wide range of applications, including diagnostics,” Professor Cunningham tells us. The development and use of apps for at-home health monitoring and disease detection is also likely to increase, such as the point-of-care smartphone-based semen analyzer which can test for male infertility, and the recently launched Billiscreen, which enables users to take selfies to screen for pancreatic cancer.