Synthetic biology (SB) is an umbrella term that covers a wide range of scientific applications. In this article, we  focus on the DNA alphabet; Adenine (A), Guanine (G), Cytosine (C), Thymine (T) and newly synthesized letters – the X-Y base pair (bp) that hope to expand the genetic alphabet. We also focus on newly implemented methods to both write a new gene faster than ever before, and store information in DNA. We interviewed two prominent scientist/entrepreneurs in the field; Emily Leproust PhD, CEO of Twist Bioscience and Floyd Romesberg PhD, a Professor of Chemistry at the Scripps Institute. The discussions provided us first-hand insights on cutting-edge advancements in SB relative to genetics and chemistry. The transcripts were edited and condensed for clarity.

Twist Bioscience is a public company that has revolutionized DNA synthesis. Their technique can make DNA or write DNA fragments (oligonucleotides) to provide a high-throughput, scalable and low-cost synthetic DNA manufacturing platform. The rigorous engineering technique known as “Silicon-powered DNA synthesis” is semiconductor-based and far exceeds the yield of the traditional phosphoramidite technique. We spoke with Emily Leproust, co-founder and CEO of Twist Bioscience on their revolutionary synthetic DNA platform.

Dr. Leproust was named one of Foreign Policy’s 100 leading Global Thinkers in 2015 for fast-tracking the building blocks of life. She has published and authored numerous patents and peer-reviewed papers on the applications of synthetic DNA.

Q: How does transferring the technology from the traditional phosphoramidite method to silicon result in the unprecedented yield?

Emily Leproust (EL): We developed the DNA synthesis platform to address the limitations of throughput, scalability, and cost, inherent in legacy DNA synthesis (writing) methods. Our core technologies combine expertise in silicon, software, fluidics, chemistry, and motion and vision control, to miniaturize thousands of parallel chemical reactions on silicon. We can therefore write thousands of strands of DNA in parallel. Specifically, we reduced the most expensive reagent (phosphoramidite) by a factor of 1,000,000.

Q: How was this technology derived and transferred for DNA synthesis at Twist?

EL: The technology was discovered and capitalized by the semiconductor industry. It is possible to grow a thin layer of silicon oxide on the surface of silicon by reacting the silicon surface with oxygen at very high temperature. The oxide layer can be etched to produce micro- and nano-structures, to modify the surface energy to be hydrophilic or hydrophobic. These modifications can also be patterned.

Q: Can you explain the oligonucleotide production process and the quantity of DNA manufactured?

EL: Currently, we manufacture DNA on a silicon chip with distinct spaces on the chip, which we call clusters. At full capacity, each chip contains 9600 clusters, and within each cluster are 121 devices, each of which supports the synthesis of a unique oligonucleotide sequence. So within each cluster, in parallel, we can construct 121 short oligos of 50 to 250 base pairs in length. Each cluster is individually customized to create and assemble the oligos into a single gene and clone them into the final form.. 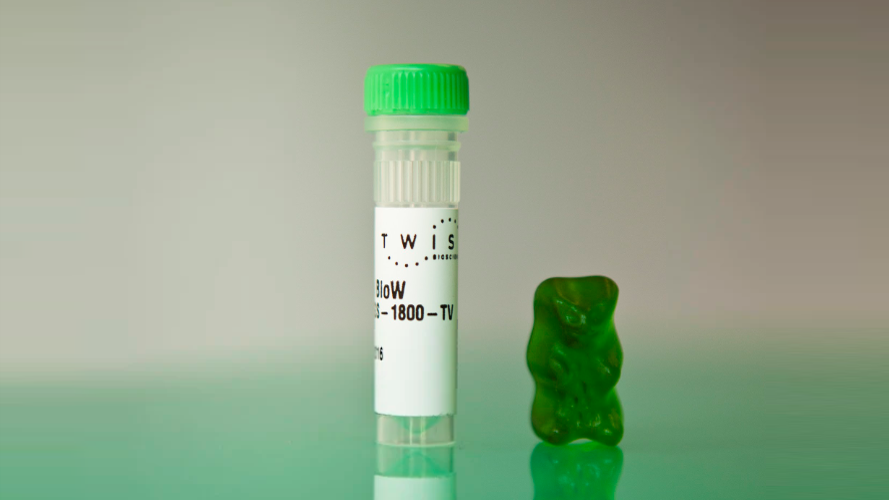 Twist aims to commercialize its  DNA storage technology over the next few years. Credit: Twist Bioscience.
Q: What are the current limits?

Q: Why is DNA an ideal storage medium?

EL: There are several reasons that I can list;

2. The medium is dense and compact enough to fit the entire internet in a shoebox.

3. The energy required for storage is extremely low, (less than a light bulb’s worth of power per year).

4. DNA readability is universal, it will last hundreds of years.

6. Important data can be encrypted and concealed.

Q: How will you play a role in advancing genome sequencing (reading) in academia and industry?

EL: We are currently selling DNA to both academia and industry. In genome sequencing (reading), we offer targeted enrichment products that we believe have the potential to play an important role from identification and diagnosis to tracking disease. Our next generation sequencing (NGS) products are listed on site.

Q: How will DNA writing technology at Twist Bioscience change in the next 10 years?

EL: We intend to take our proprietary Twist-generated DNA libraries and identify specific targets for antibody-based therapeutic opportunities. We will advance antibody discovery and partner with biotechnology/pharma companies to further advance antibody development. We will continue to integrate and internally complete more of the discovery and early development work to gain a larger portion of the value chain.

In data storage, we are working to move from synthesizing data at the scale of megabytes to terabytes. Our platform will be scalable at this level to commercialize the technology for the larger market in a few years. We will continue to deliver on our mission to provide synthetic DNA for improved health and sustainability.

The Romesberg lab has revolutionized the field of synthetic biology in the disciplines of genetics and synthetic chemistry by introducing a new DNA base pair (X-Y) to expand the existing DNA alphabet. In May 2014, Floyd Romesberg and colleagues showed that two new synthetic, hydrophobic nucleotides named d5SICSTP and dNaMTP (abbreviated X-Y) could be inserted to an Escherichia coli genome, unrecognized as lesions by the bacteria’s repair pathway.

The research achievements of the Romesberg lab led to semi-synthetic organisms (known as Synthorins) and to Synthorx; a company founded on the proprietary technology. Prof. Romesberg is the author of numerous publications and patents in the field of synthetic biology in genetics.

The company explores the proprietary technique in drug discovery for cancer and autoimmune disorders. We spoke with Floyd Romesberg about the technology and on the IPO launch of their company Synthorx (NASDAQ: THOR).

Q: How rapidly has the field of synthetic biology advanced in recent years?

Floyd Romesberg (FR): It really depends on whom you talk to, as opinions can change. If you’re not careful the definition of synthetic biology (SB) may sound like genetic engineering (GE). Although they look similar from the outside, SB is different from GE and molecular biology. What’s really revolutionized the SB field is the ability to synthesize DNA.

Craig Venter pioneered the technique where yeast assembled larger fragments of DNA; they also made a bacterial genome and built a cell around it. So Jef Boeke in his ongoing Cerevisiae 2.0 (Sc2.0) project is resynthesizing the yeast genomes. These are high points and extremely visible accomplishments in SB.

What SB means to me is to take the word synthesis to the next level – not just synthesize DNA from natural monomers – let’s make unnatural monomers and synthesize DNA from them. People wanted to call that “Xenobiology”. As I am a chemist doing chemical synthesis, I didn’t name it Xenobiology because it’s not alien DNA! The engineering-like approach and ability to make truly synthetic DNA is only representative of a small part of SB.

Q: What applications do you see for synthetic biology within your research and in your company Synthorx?

FR: Applications are very important to me. People are keen to know what exactly you have done. There’s been a lot of smoke and mirrors, even if some of the greatest accomplishments I just mentioned like Sc2.0 are nearing completion in the next year or two. If you look at the number of papers in SB that have reported the next best thing – a lot of them never get followed up.

I started Synthorx to commercialize the use of our synthetic bp system to make new drugs. Synthorx have a lead compound that they are working on to develop into a drug. It has an unnatural amino acid in it and that was encoded by and retrieved with an unnatural system.

For simplicity, let’s call the bases X and Y – the fifth and sixth nucleotide letters to make a third bp. We can replicate with it, transcribe and translate proteins. Meaning we can create new mRNAs, DNA codons and anti-codon pairs that are encoded as unnatural amino acids. The first application of interest is drug discovery. The absolute cornerstone of drug discovery is that it is not a by-design process. It is largely an intuition, a chemistry, a knowledge-guided process, but it remains highly empirical. The ability to make modifications to your target scaffold, small molecule or protein is critical.

Q: How do unnatural base pairs make these proteins?

FR: We use click chemistry – a process by which you get a certain functionality in to a protein and modify it with whatever you want afterwards. Synthorx added an unnatural amino acid with a handle on it, so once inside the protein, they can add different things to it. That’s where medicinal chemistry came into play. We can now create unnatural codons with the fifth and sixth letter, recognized by the unnatural anti-codons that are parts of the tRNA, to incorporate the functionality or goal of interest.

Aside from drug discovery, the second application of semi-synthetic organisms or SSO is less defined. Normally, we use SSOs to make a protein for our use. We get the cells to express the protein of interest, kill the cells, get the protein and then use it. In another, more exciting application, we allow cells to make protein that give the SSO new functions.

The question is can you get cells to have new functions? Instead of using bacteria to make proteins for our use, can we get them to make proteins that take on new forms and functions? These are long-term applications that will take a lot of thought and effort but it’s a real, long-term goal that’s on the horizon.

Q: Do you foresee challenges with marketing unnatural proteins to customers - isn't that maybe a bit scary for some?

FR: I think you’re right - that is scary! Genetically modified organisms (GMOs) for food are a huge controversy. But you know it’s also scary that people are dying of cancer. If you tell a person diagnosed with cancer who is expecting to live the next 3-6 months - “Look, you’ve got this molecule that’s gone through the FDA, they say it’s safe and has a 75% chance of curing you but has this unnatural—”. They’ll stop you and ask you to give them the drug.

That’s why Synthorx and my lab considered the application we chose. The goal of Synthorx is to create lifesaving drugs. And that sounds trite and cliché but that’s true. On top of that, all new technologies are often scary. Developing it in a controlled way is the first step to integrate any new technology into society in an ethical and comfortable way.

Q: What are your next steps?

FR: Sure. So, what we’re already doing, and I’m really excited about this, is we’re getting the system to work in other organisms. Right now we have it working in E. coli. We’re getting it to work in Bacillus subtilis, we’re making nice progress on that and what’s really exciting is we’re working on getting eukaryotic cells, yeast and human cells able to store this information and retrieve it as a protein. The challenge is figuring out how to deliver everything and then seeing if it works.