The Growing Role of Microfluidics in Point-of-Care Diagnostics

The Growing Role of Microfluidics in Point-of-Care Diagnostics

Since the development of the first commercially available devices in the 1990’s, microfluidic technologies have been evolving to benefit an ever-greater range of applications. Over the last decade, one particularly promising real-world application to emerge has been Point-of-Care (POC) diagnostics (2017 edition - Yole Développement).

POC tests have the potential to vastly improve health care in a number of ways, ranging from enabling earlier detection of disease, easier monitoring and increased personalization, to reaching under-served and remote populations.

What needs to be considered when creating a POC test?

The path to creating POC diagnostic devices can present a number of challenges. Tests designed for use in remote areas may need to be robust enough to withstand extremes of temperature and humidity, with as small a size and low weight as possible for ease of portability.  Keeping costs low can also be crucial, to make the devices truly affordable for widespread use in the developing world or at the patient’s bedside. Clinical translational challenges may also be faced, including more rigorous accreditation standards by agencies, and quality control assurances.

Samiksha Nayak, PhD Student in the Sia Lab at Columbia University, adds that “integration of assay chemistry, fluidics, hardware and software remains a key challenge in developing practical POC diagnostic tools. Moving something from a proof-of-concept stage to a fully integrated device that is scalable and sustainable takes considerable effort and investment.”

What role is microfluidics playing?

As an example, a microfluidic POC sepsis chip recently developed in the Laboratory of Integrated Bio Medical/Nanotechnology & Applications at the University of Illinois at Urbana-Champaign, can quantify total white blood cell counts and CD64 expression levels on neutrophils in around 30 minutes, using just 10 microliters of a blood sample. Speed of commencing treatment is critical for sepsis patients, but traditional diagnosis using systemic inflammatory response syndrome criteria can be highly non-specific and take a number of days. By rapidly analyzing the specific molecular biomarkers, the sepsis chip can help to diagnose the onset of sepsis sooner, which should lead to improvements in patient outcomes. Future developments for the chip include the ability to quantify plasma proteins and cell surface receptors expression levels to gain a more holistic picture of the patient’s immune system, as well as further validation in multi-center clinical studies. 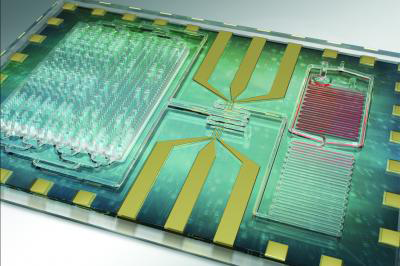 In a similar manner, the mChip-Ld, has shown promise for the early diagnosis of Lyme disease, detecting antibodies to Borrelia burgdorferi in 15 minutes at the point of care. With cases of Lyme disease on the increase, a lack of highly specific clinical manifestations, and long-term problems associated with late diagnosis, rapid detection of the disease is crucial. In addition to its speed, the mChip-Ld, which consists of a microfluidic cassette which carries out the immunoassay steps, demonstrates levels of sensitivity and specificity comparable to traditional C6 ELISA testing for identifying Lyme positive samples. Additional features that make the device attractive for POC testing are its low cost ($1.50 per cassette), and ease of use.

In efforts to improve access to diagnostics for pertussis, Dr. XiuJun Li and a team of researchers at UTEP are developing a paper-based microfluidic POC device suitable for use in resource-limited countries. Estimated to cost only a few dollars, the low-cost biochip integrates isothermal DNA amplification, with sensitivity and specificity comparable to real-time PCR. In less than an hour, the presence of pertussis bacteria can be detected by a colour change, helping to diagnose the highly contagious and potentially life-threatening condition more rapidly and cheaply than current methods.

What can we expect for the future of POC diagnostics?

“The POC ecosystem is evolving faster than ever and new technology has to fit into a broader landscape. In order to make a tangible impact, POC developers have to consider some of these broader forces, like clinical workflow, reimbursement strategies, regulatory policies and legislation, which go beyond traditional research areas. It’s an exciting time for POC developers as nontraditional components like consumer electronics, connectivity, and data analytics have infused the field with new energy,” Nayak tells us.

It's likely that we will continue to see growth in the range of POC diagnostics available, as advances in materials and microfluidics enable the development of new and better devices, while reducing the cost to produce them. Breakthroughs such as the recently published method of 3D printing microfluidic lab-on-a-chip devices could help lead to cheaper mass-production of diagnostic devices. The use of smartphones paired to microfluidics could enable an increased range and ability of POC testing, with the development of devices such as the TRI analyzer on the horizon.
Related Topics
ELISA
PCR
Immunoassays
Infectious Diseases
The Immune System
Biomarkers
Meet the Author