In the 1970s, the Nobel-prize winning work of Kolher and Milstein enabled researchers to produce individual — or monoclonal — antibodies infinitely in culture using hybridoma technology. This key innovation paved the way for the development of therapeutic antibodies.

“When we have an immune response, we normally generate lots of different antibodies to different parts of a pathogen,” says Mark Cragg of the Cancer Research UK Southampton Centre. “Monoclonal antibody technology enabled us to just take just a single antibody to a specific antigen and produce it infinitely in culture.”

In 1986, the Food and Drug Administration (FDA) approved the first therapeutic monoclonal antibody for the prevention of transplant rejection. By the end of 2019, a total of 79 antibody-based drugs were approved to treat a range of autoimmune conditions, infectious diseases and cancers. Many more potentially exciting therapies are also in the pipeline — including against HIV or Ebola.

With recent advances in antibody engineering technologies helping to further accelerate progress, therapeutic antibodies are set to remain a feature of the drug development landscape for many years to come.

The evolution of antibody production

“Antibodies are essentially a very precise way for the body to specifically target any protein for immune destruction,” says Brandon DeKosky, Assistant Professor at the University of Kansas.

These Y-shaped proteins have a variable binding domain at one end, which recognizes and binds with a specific protein (or antigen) on a pathogen. At the other end, they have a constant region that interacts with other molecules on immune cells to trigger a response. Collectively, our body’s army of antibody-generating cells — B cells — have the potential to recognize countless antigens.

“You can generate an antibody against a specific target molecule — and then use it to block or manipulate how that target works,” says Cragg.

Traditional hybridoma technologies involved injecting mice with an antigen and then isolating and immortalizing a single B-cell clone to produce a specific antibody.

“But when you put this type of antibody into a person, their immune system will invoke an anti-mouse response which can limit their effectiveness and potentially cause serious side effects,” explains Cragg.

The next generation were chimeric human antibodies, where the mouse antigen-binding region is placed within a human framework.

“We still use chimeric antibodies as drugs today — one of the most successful is rituximab, which is used to treated lymphoma and autoimmune diseases,” says Cragg.

Replacing more and more of the mouse antibody regions has led to "humanized" antibodies where the only remaining amino acids of mouse origin are those that make direct contact with the antigen.

But the latest generation of therapeutic monoclonal antibodies are fully human. These are generated either by using mice that have been genetically engineered to carry human antibody genes, or through recombinant display screening technologies that involve inserting a library of human antibody gene sequences into bacteriophage or yeast.

“You basically express your antigen and pan across your display library to find one that binds to it,” explains Cragg.

A major advantage of this approach for generating a monoclonal antibody is its speed compared to traditional hybridoma technologies: “You can go from three to six months to generate an antibody — down to only one to two weeks,” says Cragg. 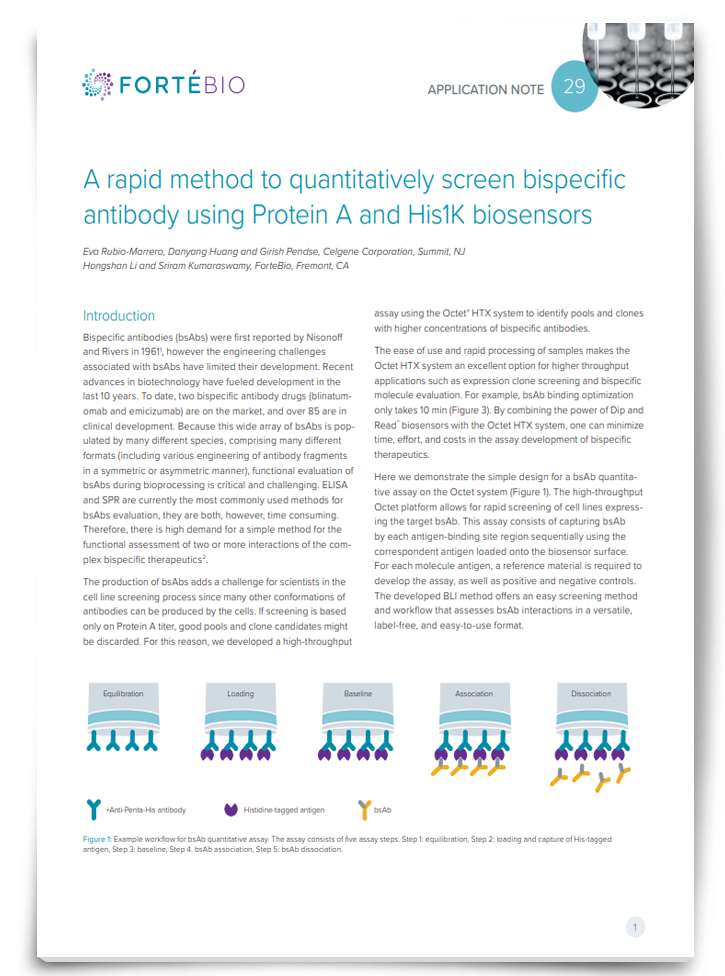 Functional evaluation of bsAbs during pharmaceutical development is critical to their success, but this is not without challenges. Existing evaluative methods such as ELISA and SPR are commonly used but are often time consuming. Therefore, there is high demand for a rapid, simple method for the functional assessment of two or more interactions of bispecific therapeutics. In this app note, discover an assay that caters to this demand with a method that is versatile, high-throughput, and low-cost.

“Display platforms are fantastic technologies that have led to a lot of the monoclonal antibody drugs that we use today,” says DeKosky.

But there is a problem with achieving native pairing of the heavy and light chain molecules that make up each antibody. In nature, these genes sit on different chromosomes and the polypeptide chains are only paired after translation. The traditional approach to creating a display library involves collecting the heavy chain genes in one group and the light chain series in another and then randomly combining these together.

These non-native gene pairings can lead to antibodies that aren’t good enough quality to become effective therapeutics. But newer display platforms maintain the native pairing of human antibodies by physically linking the heavy and light chain genes together.

“We can use these display libraries to screen millions of natively-paired antibodies to find natural human antibodies that can bind to the antigen — in a much faster and more powerful way than hybridoma technology can do,” says DeKosky.

The low cost of next-generation sequencing has also fundamentally altered what researchers can do, providing them with the capability to rapidly carry out large-scale analyses of data generated from library screens.

“Instead of it taking maybe four months to look at 50 or 100 genes, we’re looking at more like two weeks to look at 50 to 100,000,” says DeKosky. “So it’s really changed the way we can understand and mine patient immune responses.”

Another game-changer is rapid DNA synthesis, which removes the need to physically identify and recover a gene using PCR.

“If you can sequence it, you can synthesize it, clone it and make it,” describes DeKosky.

After identifying an antibody, researchers also have the option to carry out genetic engineering to further improve its binding affinity — a process known as affinity maturation.

“You effectively make random changes to the antibody binding site, put these sequences into a display library and carry out another screen to find the ones that bind more tightly,” explains Cragg. 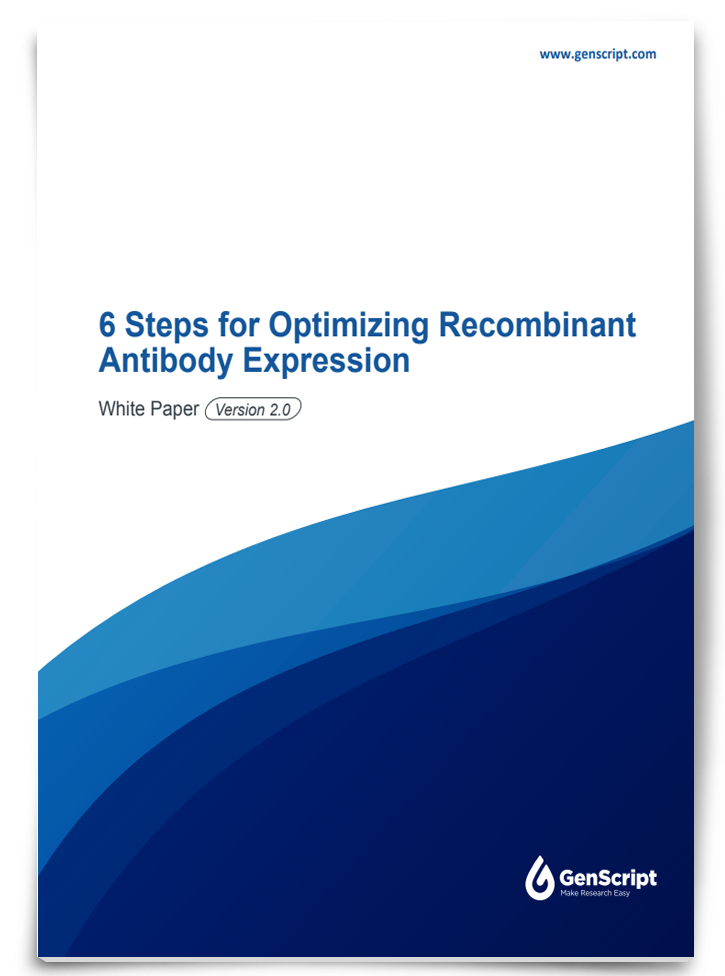 Monoclonal antibodies (mAbs) have pioneered discovery and development in biological science and medicine, playing an increasingly important role in research and drug discovery. To meet this rising demand, researchers have developed alternative methods to accelerate antibody production – the generation of recombinant antibodies (rAbs), often in mammalian cell lines. In this white paper, discover the steps to optimizing rAb expression.

Building our knowledge of how antibodies interface with other components of the immune system will lead to the development of therapeutics that are modified to change the way the antibody behaves.

“The next frontier is more of an intellectual or design problem — knowing about what you want the drug to achieve in the body and how you’re going to do it,” says Cragg.

For example, cancer researchers are trying to understand more about one of the most important determinants of antibody activity, the efficient interaction with Fc receptors on the surface of immune cells.

“We’re seeing early signs of that with therapeutics that potentiate T cell responses,” says DeKosky. “And within the coming decades, I think we’re going to be using antibodies to recruit more and more cells in one way or another into the game.”

We are also likely to see the development of more bispecific antibodies, which can simultaneously target two different antigens.

“They’re more sophisticated as they’re able to bring in more mechanisms all at the same time,” comments Cragg.

No limits for therapeutic antibodies

Over the coming years, we are likely to see the development of new and better antibodies and more personalized treatment. But looking further ahead, the way that antibodies are delivered into a patient may radically change.

“Within the next 10 years, we’ll have a larger armory of different monoclonal antibodies and a better understanding of which patients to treat with which antibodies and in what combinations,” predicts Cragg. “In the longer term, we may remove the need to produce antibodies outside the body at all — and instead introducing DNA constructs into the patients to make them on-site — making it much, much cheaper.”

Researchers are increasingly excited about what the future holds for therapeutic antibodies.

“I think in some ways we’re just getting started exploring what these molecules can really do,” concludes DeKosky.

Complete the form below to unlock access to this Audio Article: "The Therapeutic Antibody Revolution"