Complete the form below and we will email you a PDF version of "Diagnostic Biomarkers in Human Primary Membranous Nephropathy: anti-PLA2R, anti-THSD7A and Beyond"

Membranous nephropathy is a kidney-specific autoimmune disease that is characterized by inflammation of the glomerulus which normally aids in filtering fluids and wastes.1 MN is a major cause of nephrotic syndrome, predominantly affecting non-diabetic Caucasian adults above 40 years of age.1,2 In MN, the glomerular basement membrane thickens, resulting in increased proteinuria and progressive loss of kidney function.3 In addition to proteinuria, MN can manifest as lipiduria, hyperlipidemia, hypoalbuminemia, and edema.4

There are two forms of MN: primary membranous nephropathy (pMN) and secondary membranous nephropathy (sMN). Approximately 80% of cases are of the primary form, while the remaining 20% are secondary.5 The acknowledgement of pMN as an autoimmune disease has considerably changed the diagnostic and therapeutic approaches of this condition. pMN is not correlated to a specific underlying disease and is often caused by specific autoantibodies. On the other hand, sMN is triggered by an underlying disease such as hepatitis B, systemic lupus erythematosus, or cancer.6 It can also be triggered by the use of drugs such as penicillamine or non-steroidal anti-inflammatory drugs.6

Diagnosis of pMN in the United States

To obtain a differential diagnosis of pMN, it is important to exclude any secondary causes by conducting tumor screenings, distinguishing from other autoimmune diseases associated with the kidneys, and reviewing the patient’s medication list. However, per the 2012 KDIGO guidelines, a renal biopsy is the standard of care for diagnosis.8 The nephrotic tissue is investigated by microscopy. A positive result typically reveals deposits in the kidney. The discovery of nephrological autoantibodies against phospholipase A2 receptor (PLA2R) in 2009 and thrombospondin type 1 domain containing 7A (THSD7A) in 2014 were major breakthroughs in providing a reliable diagnosis of pMN.7 Because biopsies are quite invasive procedures, the discovery of PLA2R and THSD7A autoantibodies has enabled a more gentle means of diagnostics through blood tests. With the discovery of novel target antigens mentioned later, updated KDIGO guidelines are expected to aid in better diagnosis and management of pMN. 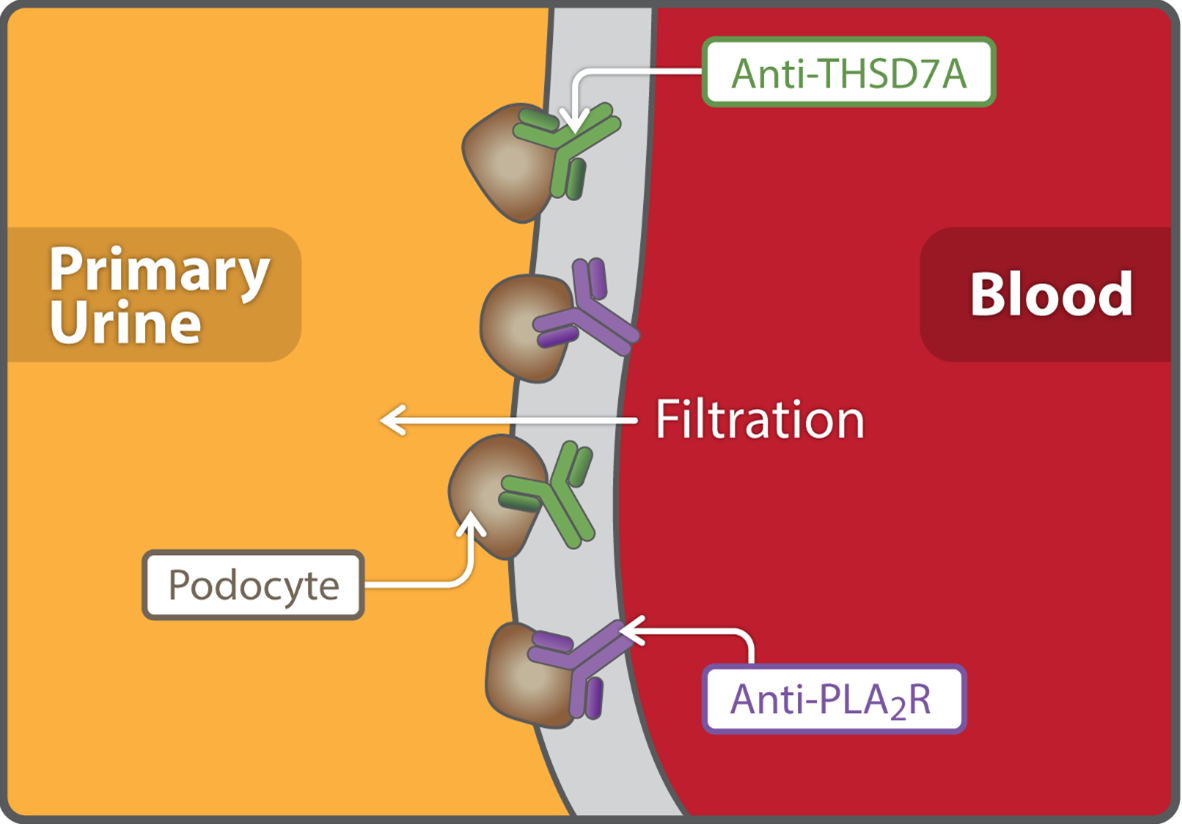 Figure 1 Filtration barrier of the kidney. Binding of PLA2R and THSD7A occurs on the surface of kidney podocytes which are expressed in human glomeruli. Illustration adapted from Ronco et al. 2012.9

Role of Anti-PLA2R antibodies in pMN

PLA2R is a type I transmembrane receptor glycoprotein expressed in the glomerulus on the surface of podocytes.10 Currently, two types of PLA2R are recognized: type M (muscular or PLA2R1) and N (neuronal or PLA2R2).11 Although the N-type antigen is not well understood and requires more research, the M-type antigen has been identified as the more predominant of the two in pMN.10 M-type PLA2R has been detected in the sera and is the target antigen in about 70% of pMN patients.12 PLA2R is both a prognostic and diagnostic marker for pMN. This antibody is not found in patients with sMN, suggesting that PLA2R is of great clinical importance for diagnostic differentiation, clinical disease activity and course, and therapy monitoring of pMN.13 Noteworthily, there is excellent correlation to disease activity. For instance, the higher the antibody titers, the higher the severity of the disease, and the lower the antibody titer, the more indicative of remission or lesser complications. 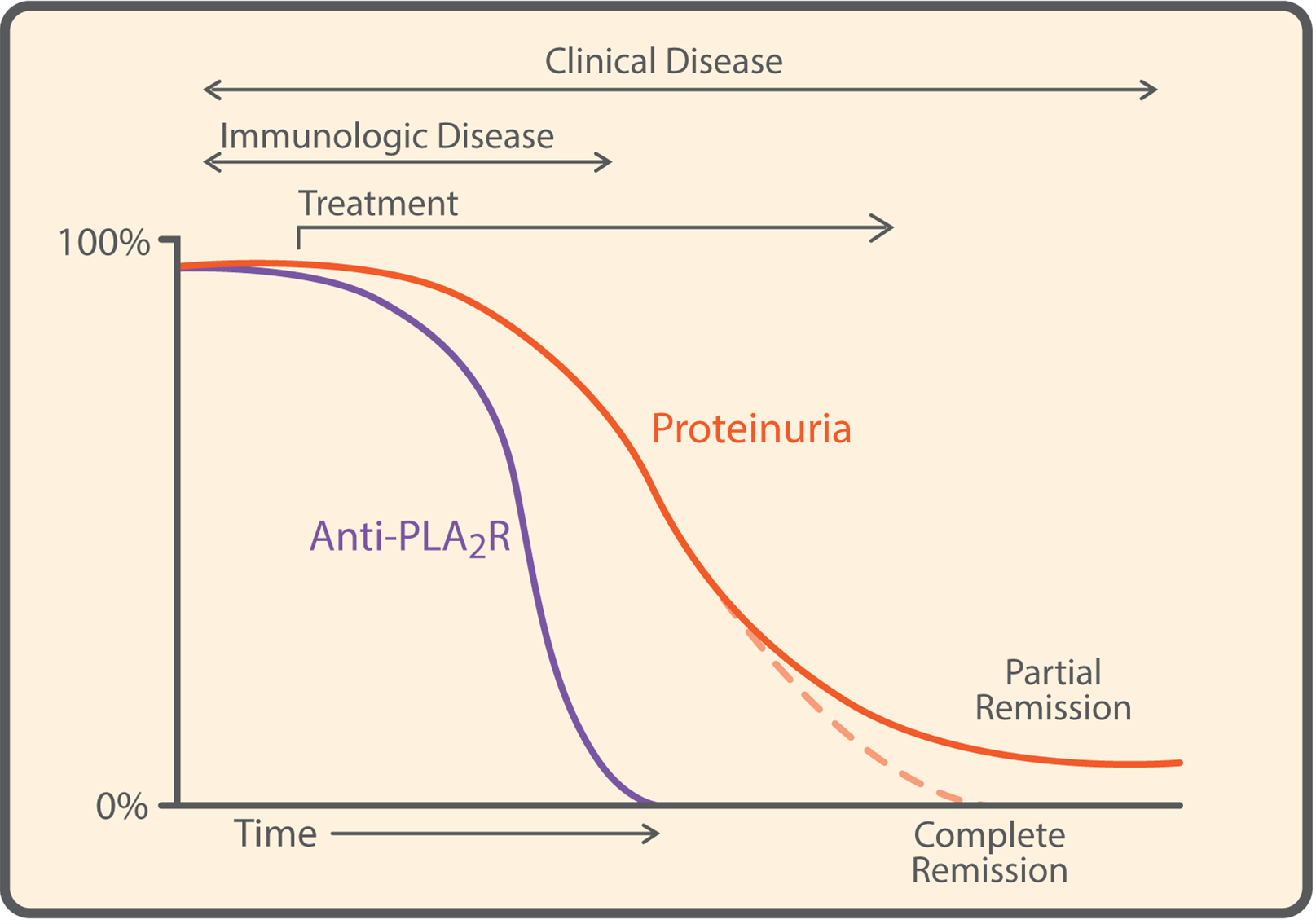 Reliable and specific detection of PLA2R can be accomplished through indirect immunofluorescence test (IIFT) and enzyme-linked immunosorbent assay (ELISA). EUROIMMUN holds the exclusive license to measure both these target antigens in pMN. The anti-PLA2R IgG IIFT contains 2 BIOCHIPs: one with transfected human cells expressing recombinant PLA2R and the second with control-transfected cells.15 The two BIOCHIPs allow for reliable screening and provide qualitative and semi-quantitative detection of anti-PLA2R antibodies.15 In a cohort of 560 patients, the clinical sensitivity and specificity was found to be 77.1% and 100%, respectively.15 Since the prevalence of anti-PLA2R in pMN is between 70-80%5, the clinical sensitivity of 77.1% aligns well with the overall patient population.

Moreover, the anti-PLA2R IgG ELISA provides a semi-quantitative or quantitative detection of antibody titers of anti-PLA2R.16 This ELISA has a high predictive value allowing for proper assessment of disease course, therapy success, and risk of relapse.16 The anti-PLA2R antibody concentrations were determined in a cohort of 1034 patients. The ELISA achieved a sensitivity and specificity of 96% and 99.9%, respectively.16 Both the IIFT and ELISA can be done in a quick and simple manner using serum or plasma samples.15,16 This is suitable for any diagnostic laboratory, particularly with the possibility of automation.

Role of anti-THSD7A antibodies in pMN

Other novel target antigens in pMN

Roughly 15-25% of pMN cases feature no reactivity against both PLA2R and THSD7A, suggesting that additional antigenic targets exist. A novel pMN diagnostic biomarker called neural tissue encoding protein with epidermal growth factor (EGF)-like repeats (NELL-1) was discovered though a screen of kidney biopsy samples in PLA2R negative pMN patients.19 While the predominant IgG subclass directed against PLA2R and THSD7A is IgG4, the most common subclass associated with NELL-1 was found to be IgG1.19 Additionally, NELL-1 is thought to be a useful biomarker in patients who are double negative for antibodies against PLA2R and THSD7A.19

In a screen of biopsy confirmed pMN urine samples, 249 proteins were found to be upregulated in pMN samples compared to healthy controls.20 Two proteins in particular, alpha-1-antitrypsin (A1AT) and afamin (AFM) were significantly increased in pMN urine compared to the control samples.20 However, A1AT and AFM have been reported in other forms of glomerular diseases and may therefore not be pMN-specific biomarkers.21,22 Other potential biomarkers such as extracellular vesicles, circular RNAs, miRNAs have been shown to be differentially expressed or increased in pMN blood or urine samples compared to controls.23 However, further studies are needed to establish these biomarkers as being specific for pMN. Additional biomarkers that can be used to distinguish pMN from sMN include exostosin 1(EXT1) and exostosin 2 (EXT2).24

The need for biomarker detection prior to kidney transplantation

Uromodulin, a glycoprotein synthesized and secreted by the kidney, is a marker for renal function.27 Lowered levels of uromodulin in serum or plasma are an indication of decreased renal function and so measurements of uromodulin are useful for monitoring kidney function post kidney transplantation. Additionally, the detection of anti-PLA2R antibodies post-kidney transplantation can be useful for assessing the need and degree of immunosuppressive therapy.

Both PLA2R and THSD7A are large podocyte-expressed proteins which trigger a humoral immune response resulting in predominately IgG4 circulating autoantibodies. Antibodies against both PLA2R and THSD7A have been identified as specific diagnostic biomarkers for pMN. Due to the high specificity and prevalence of anti-PLA2R antibodies in pMN patients, anti-PLA2R represents a significant serological biomarker for the detection of pMN. Additionally, the detection of anti-PLA2R antibodies may be useful for treatment decisions and disease prognosis. It is important that pMN is discriminated from sMN which occurs because of infections, tumors, drug therapy and in other autoimmune diseases and which requires different treatment. Together, PLA2R and THSD7A represent about 85% of cases of pMN. While other novel biomarkers for pMN detection have been discovered, such as NELL-1, there are still further antigens that have yet to be identified.