It is no secret that clinical trials are the priciest chunk of bringing a new drug to the market. While an early-stage clinical study can cost in the range of $1–7 million, later stage trials represent the largest cost fraction extending from $12 to $53 million.1 Yet nine out of ten drugs in clinical development are never approved. That’s a lot of money to spend without reaching a successful outcome, and a lot of new therapies that will never reach the patients that need them.2

Many treatments fail in clinical trials due to lack of efficacy. But while some of this may be due to poor target selection during the drug discovery process, it’s becoming increasingly clear that only certain patients respond to treatments while others do not. Matching the right patient to the right treatment based on molecular biomarkers – an approach known as precision medicine – is potentially a powerful way to increase the chances of successfully bringing new therapies through clinical trials and to the market.3, 4

Rather than viewing therapies as “one size fits all”, precision medicine aims to treat patients as individuals or stratify them into groups with distinct molecular profiles. Identifying and validating relevant biomarkers early in the drug development pipeline ensures that new therapies can be tested on the patients they are intended for, reducing the attrition rate in clinical trials and saving drug development costs.

Trials that use biomarkers to select patients are much more likely to proceed to the next stage of development. For example, 10.7% of trials for new cancer drugs that use biomarkers to stratify patients obtain market approval, compared with just 1.6% of treatments tested on unselected patients (Figure 1).2-4 Using biomarkers in early trials can also inform decisions about how later trials should be designed to maximize their chance of success.3,4 Yet despite the growing interest in precision medicine, only around 7% of trials are currently stratifying patients using biomarkers.2 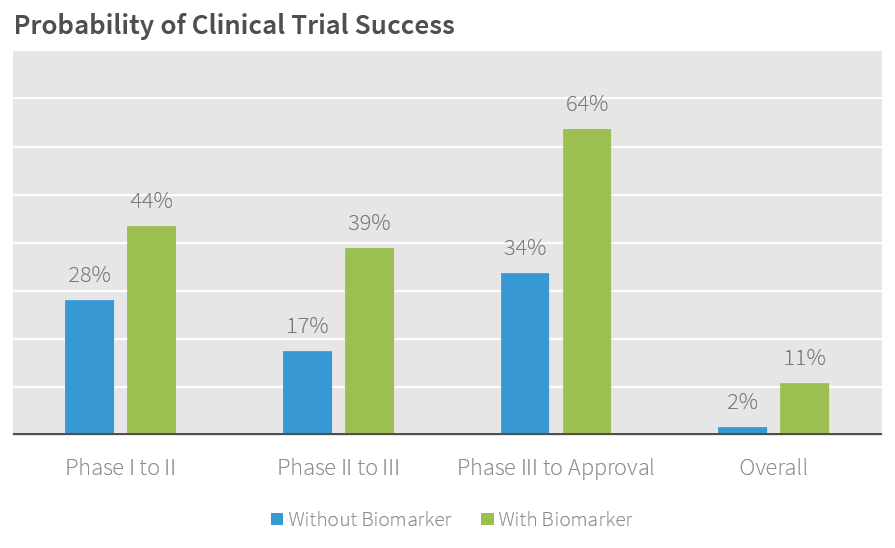 Figure 1. Probability of clinical trial success with and without a biomarker in oncology2

In search of the perfect biomarker

While genomic and transcriptomic approaches have been the methods of choice for stratification biomarker discovery, they are inherently limited in their ability to reveal the full picture of what’s going on within a tissue or in the wider body. After all, most biological activities relate to proteins, and drugs typically target proteins not nucleic acids.

Identifying and measuring the levels of clinically relevant proteins in biological samples provides deeper, more functional insights into a patient’s disease, aiding with the selection of the most appropriate treatment and monitoring how well it is working.

Biological fluids such as blood, urine, saliva and cerebrospinal fluid offer a more accessible and less invasive source of samples for proteomic analysis compared to hard to obtain tissue biopsies.

In the past, poor reproducibility and insufficient depth have rendered proteomics on biofluids not a method of choice. Thanks to recent advances in mass spectrometry and data analysis, these challenges can now be overcome, and clinical proteomics is becoming an area of strong interest for biopharma companies.

One of the key technological drivers in the field of proteomics is an innovative approach to measuring proteins on a large scale. The method was developed by ETH Zurich, Biognosys and AB Sciex back in 2012 and has now achieved broad recognition and validation. The technique, called data-independent acquisition (DIA) mass spectrometry, differs from traditional shotgun proteomics in that every peptide in the sample is fragmented and analyzed in parallel, in a single measurement. The result is comprehensive, unbiased, reliable, and quantitative proteomic profiling that reveals robust and reproducible biomarkers, even in biological fluids.5,6
Going deep into the plasma proteome

Blood plasma is the preferred fluid for biomarker discovery as it is easy to collect and contains an array of proteins that may indicate what is going on inside a patient’s body. Besides proteins essential for molecular transport, homeostasis and immune responses, it contains proteins that originate from the tissues that are nurtured by the blood flow, which makes it a window to the body. As a consequence, the composition can change constantly as a result of biological processes.

A recent study from researchers at Nestlé and Biognosys demonstrated that large-scale plasma proteomics and biomarker discovery is now an achievable reality. Using the DIA technology, the team quantified 565 proteins from 1,508 plasma samples taken from obese patients who participated in a weight loss clinical study.7

They found that the levels of 271 proteins, including 19 proteins that carry fat around the body, changed significantly after weight loss, presenting a large number of potential biomarker candidates. Analyzing known clinical biomarkers demonstrated that weight loss reduced inflammation and improved the metabolism of the patients. The results were in line with previous studies of plasma proteome changes after weight loss, indicating a robust methodology and high-quality biomarker candidates.7

The Key To The Plasma Proteome 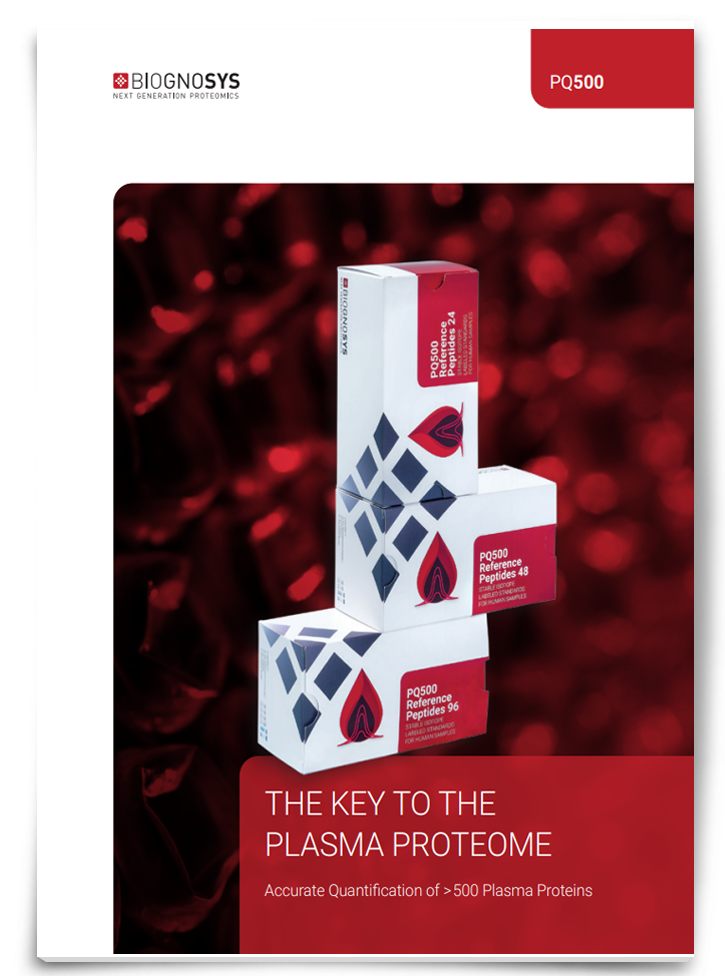 Blood plasma is a rich and accessible source of biomarkers for clinical research and patient stratification. However, the low abundance of many plasma proteins makes it a challenging sample for protein quantification. Download this application note to discover how PQ500 overcomes these challenges.

By measuring relative protein abundances over the whole proteome, DIA provides a hypothesis-free approach for novel biomarker discovery. This unbiased approach can be now combined with targeted profiling of specific proteins of interest for which absolute quantifications can be obtained. This is achieved by spiking the samples with reference peptides, typically these are stable isotope labelled peptides, which serve as standards for the absolute quantification.

One of the most comprehensive plasma proteomics peptide reference kits, PQ500™, was developed by Biognosys. The kit provides absolute quantification of 500 proteins in plasma, including 49 peptides that have already been approved by the FDA for assessing major diseases and physiological conditions.8 The kit has been already used by a number of biopharma companies in their biomarker discovery efforts in plasma as well as other biological fluids.

Ready for the next generation of clinical trials

Recent advances in high-throughput proteomics analysis now allow robust identification and quantification of thousands of proteins in a single biological sample, making the routine use of protein biomarkers a reality in clinical research.

Biological fluids such as blood, urine, saliva and cerebrospinal fluid offer an accessible and less invasive source of samples for analysis in search of suitable biomarkers. Proteomics provides a cost-effective way of identifying and validating biomarkers to maximize the chances of success in clinical research. In turn, this means significant savings in terms of time and money, and a much greater chance of bringing new therapies to the patients that need them.

References:
Advertisement
Chosen for you
Article