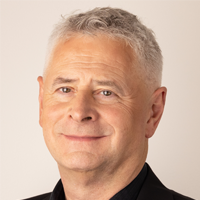 Mikael has been interested in life sciences for as long as he can remember. He studied chemistry at University of Göteborg, Sweden, and obtained his B.Sc. in chemistry in 1984. He then worked at Astra Hässle (today part of AstraZeneca), studying the K+/H+-ATPase inhibitor omeprazole, which became the bestselling pharmaceutical drug of its time for treating ulcers. In 1988, he received his Ph.D. in physical chemistry for studies of nucleic acid interactions with polarized light spectroscopy. After post-doctoral studies on transcriptional foot-printing (Melbourne, Australia), and chromatin and epigenetic modulation of nucleosomes (Yale, USA), he started his own research group in Göteborg on DNA-ligand interactions. His group discovered a novel mechanism of transcriptional activation of oncogenes, which led to the development of a new class of anticancer drugs targeting specific quadruplex DNA structures. Mikael’s team also developed methods for multidimensional data analysis (based on which MultiD Analyses AB was founded), and invented the light-up probes for nucleic acid detection in homogeneous solution, which led to the foundation of LightUp Technologies AB as Europe’s first company focused on quantitative real-time PCR (qPCR)-based diagnostics. In 2001, Mikael founded TATAA Biocenter as a center of excellence in qPCR and gene expression analysis, initially as a training institution and later as a custom service and high-quality reagent provider. During his career, Mikael has registered 21 patents and has founded five biotechnology start-up companies focused. He has also authored over 170 original research papers and 19 reviews in international peer-review journals that have been cited more than 15,000 times. Mikael also co-authored the MIQE guidelines for RT-qPCR analysis, which receives an average of 25 citations per week, and is a member of the CEN/ISO group drafting guidelines for the pre-analytical process in molecular diagnostics.

As a cornerstone of genetic analysis in biological research, quantitative PCR (qPCR) and digital PCR (dPCR) are the most sensitive molecular methods to analyze nucleic acids and play a key role in the development of cell and gene therapies (CGT).

These tools are widely used during CGT development for example in biodistribution, pharmacokinetics and pharmacodynamics of the investigational lead molecule. But many samples, including tissues rich in nucleases, lipids and other inhibiting substances and target molecules that are short or contain modified bases, can be challenging to work with. For these types of samples, assay design using advanced strategies, concentration standards, spike-in controls and validated normalization is key for reliable analyses.