Bacteria Can Eat and Digest Plastic

Molly Campbell is a senior science writer at Technology Networks. She holds a first-class honors degree in neuroscience. In 2021 Molly was shortlisted for the Women in Journalism Georgina Henry Award.
Learn about our editorial policies
Credit: Brian Yurasits on Unsplash.

A new study by scientists at the Royal Netherlands Institute for Sea Research (NIOZ) has found that bacteria can break down and digest plastic. The research is published in Marine Pollution Bulletin.

Can plastic be degraded by micro-organisms?

The study, led by Maaike Goudriaan, a PhD student at NIOZ, focused on the bacterium Rhodococcus ruber, which is found in a variety of habitats and can tolerate stressful environments. It is also known to form a “biofilm” on plastic found in nature.

Goudriaan’s experiment utilized a type of plastic manufactured to carry a specific form of carbon – carbon-13 (13C). In the laboratory, Goudriaan fed the plastic to R. ruber in a bottle of artificial seawater after pre-treating it with a UV lamp. "The treatment with UV light was necessary because we already know that sunlight partially breaks down plastic into bite-sized chunks for bacteria," she says.

Goudriaan found that CO2 production occurred in the laboratory model, from which she could measure the amount of 13C-CO2 and translate this to the amount of plastic degraded. "This is the first time we have proven in this way that bacteria actually digest plastic into CO2 and other molecules," she states. It was already known that the bacterium R. ruber can form a so-called biofilm on plastic in nature. It had also been measured that plastic disappears under that biofilm. "But now we have really demonstrated that the bacteria actually digest the plastic." 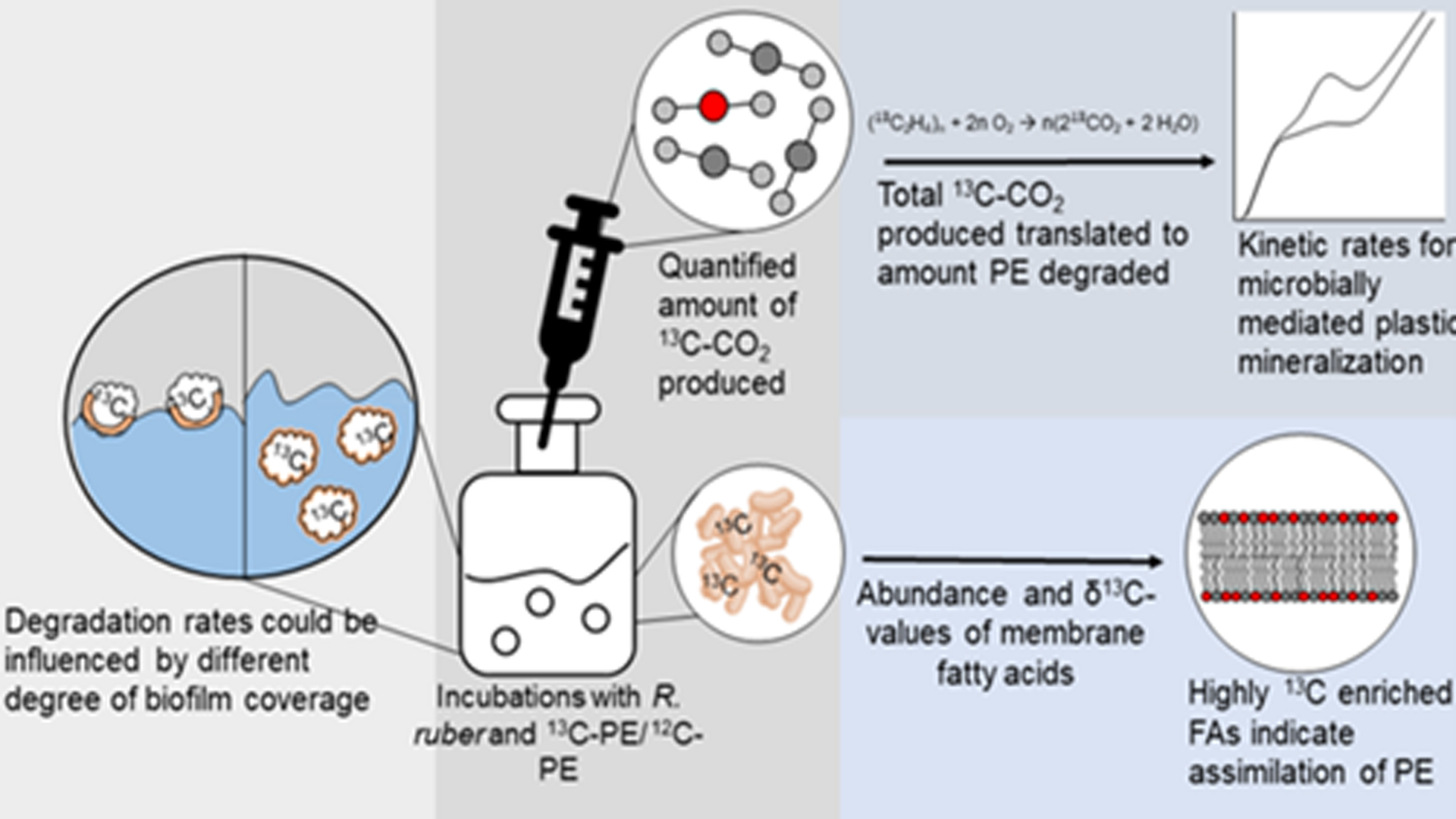 Goudriaan calculated that R. ruber can breakdown ~one percent of the plastic each year. "That's probably an underestimate," she emphasizes. "We only measured the amount of carbon-13 in CO2, so not in the other breakdown products of the plastic. There will certainly be 13C in several other molecules, but it's hard to say what part of that was broken down by the UV light and what part was digested by the bacteria."

Prevention is better than cleaning up

Microbial digestion does not represent a total solution to the issue of plastic pollution in the ocean, the researcher notes. But – it could be part of the solution. It could also provide an answer as to why there is so much plastic considered “missing” in the ocean. “These experiments are mainly a proof-of-principle. I see it as one piece of the jigsaw, in the issue of where all the plastic that disappears into the oceans stays. If you try to trace all our waste, a lot of plastic is lost. Digestion by bacteria could possibly provide part of the explanation," Goudriaan says.

The proof-of-principle study will need to be followed up with experiments testing whether bacteria in the “wild” may also eat or digest plastic. To that end, Goudriaan has conducted pilot experiments with real sea water and sediment obtained from the Wadden Sea floor. The first results hint that plastic may indeed also be degraded in nature. “A new PhD student will have to continue that work. Ultimately, of course, you hope to calculate how much plastic in the oceans really is degraded by bacteria. But much better than cleaning up, is prevention. And only we humans can do that," she says.

This article is a rework of a press release issued by the Royal Netherlands Institute for Sea Research. Material has been edited for length and content.