Replicating how cancer and other cells interact in the body is somewhat difficult in the lab. Biologists generally culture one cell type in plastic plates, which doesn’t represent the dynamic cell interactions within living organisms. 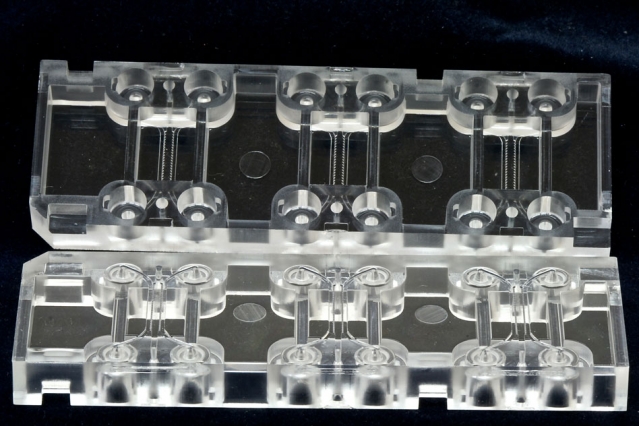 “If you want realistic models of these processes, you have to go to a 3-D matrix, with multiple cell types … to see cell-to-cell contact and let cells signal to each other,” Kamm says. “None of those processes can be reproduced realistically in the current cell-culture methods.”

Designed originally for Kamm’s lab, the new commercial device is a plastic chip with three chambers: a middle chamber for hydrogel and any cell type, such as cancer cells or endothelial cells (which line blood vessels), and two side channels for culturing additional cell types. The hydrogel chamber has openings along each side, so cells can interact with each other, as they would in the body. Cancer drugs or other therapeutics can then be added to better monitor how cells respond in a patient.

Lab-fabricated devices have been used for various applications described in more than 40 research publications to date, including studies of cancer and stem cell research, neuroscience, and the circulatory system. This month, AIM Biotech will begin deploying the commercial devices to 47 research groups in 13 countries for user feedback.

Other systems for 3-D cell culturing involve filling deep dishes with hydrogels. Because of the distance these dishes must be kept from the microscope, Kamm says, it’s difficult to capture high-resolution images. AIM Biotech’s devices, on the other hand, he says, can be put directly under the microscope like a traditional plate, which is beneficial for imaging.

“Everything here happens within about 200 microns of the cover slip, so you can get really good high-resolution, real-time images and movies,” Kamm says. 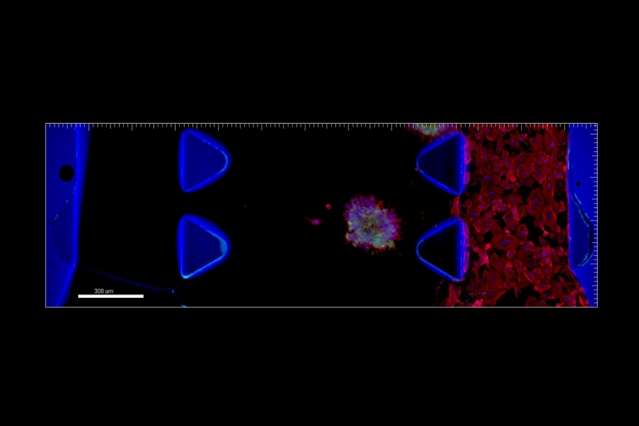 In 2005 at MIT, Kamm’s lab created a prototype of the microfluidics device to better study angiogenesis — the forming of new blood vessels. But there was a major issue: The hydrogel in the middle chamber would spread into the side channels before solidifying, which disturbed the cell cultures.

As a solution, the researchers lined the hydrogel chamber with minute posts. When injected, the hydrogel seeps out to the posts, but surface tension keeps it from leaking into the side channels, while still allowing the cells to enter. “That’s the key,” Kamm says. “When you put liquid into a small space, surface tension drives where it goes, so we decided to use surface tension to our advantage.”

Soon, Kamm was using the device in his lab: In a 2011 study, researchers in his group discovered that breast cancer cells can break free from tumors and travel against flows normally present inside the tissue; in a 2012 study, they found that macrophages — a type of white blood cells — were key in helping tumor cells break through blood vessels.

And in a 2013 study, Kamm was able to capture high-resolution videos of how the cells escape through minute holes in endothelial walls and travel through the body. “People try to do this in vivo, but you can’t possibly get the kind of resolution you can within a microfluidic system,” Kamm says.

Researchers worldwide began taking notice of the device, which led to several collaborations with researchers locally and in Singapore: The device’s development had been funded, in part, by the Singapore-MIT Alliance for Research and Technology (SMART).

“It became apparent that, if there’s this much interest in these systems and that much need for them, we should set up a company to develop the technology and market it,” Kamm says.

After securing seed funding from Draper Laboratory, the National Institutes of Health, and SMART, Kamm brought the idea for the device to Innovation Teams (i-Teams), where MIT students from across disciplines flesh out strategies for turning lab technologies into commercial products. Among other things, this experience helped Kamm home in on the product’s target market.

“At the time, [I was] trying to decide whether to go for researchers, go directly to pharmaceutical industry, or something that is useful in the clinic,” Kamm says. “One of the i-Teams’ recommendations was to develop systems for researchers. It reinforced what we were heading toward, but it was nice to get that confirmation.”

A major application for the device, Kamm says, is studying cancer metastasis — as demonstrated with his own work — to develop better treatments.

In the body, cells break loose from a tumor and migrate through tissue into the blood system, where they get stuck in the small blood vessels of a distant organ or adhere to vessel walls. Then they can escape from inside the vessel to form another tumor. AIM Biotech’s microfluidics device produces a similar microenvironment: When endothelial cells are seeded into the side channels or the central gel region, they form a 3-D network of vessels in the hydrogel. Tumor cells can be introduced, flowing naturally or getting stuck in the vessels.

Kamm says this environment could be useful in testing cancer drugs, as well as anti-angiogenesis compounds that prevent the development of blood vessels, effectively killing tumors by cutting off their blood supply. While many such treatments have shown limited success, “there’s a lot of interest in screening for new ones,” Kamm says.

In the future, Kamm adds, AIM Biotech may offer to more accurately screen cancer drugs for pharmaceutical companies. In fact, he says, AIM Biotech recently discovered that its devices revealed discrepancies in some clinically tested therapeutics.

Researchers used Kamm's microfluidics technology to screen several drugs that aim to prevent tumors from breaking up and dispersing throughout the body. Results indicated that the level of drugs needed was often two orders of magnitude higher than predictions based on traditional assays. “So there’s no way to effectively predict, from the 2-D assays, what the efficacy of a particular drug was,” Kamm says.

If pharmaceutical companies were to winnow potential drugs from, say, 1,000 to 100 for testing, Kamm says, “We could test those drugs out in a more realistic setting.”

The Dash for NASH: How To Succeed in NASH Therapeutic Development