Molly Campbell is a senior science writer at Technology Networks. She holds a first-class honors degree in neuroscience. In 2021 Molly was shortlisted for the Women in Journalism Georgina Henry Award.
Learn about our editorial policies
Raw chicken. Credit: JK Sloan on Unsplash.

On November 16, the US Food and Drug Administration (FDA) announced its first pre-market consultation for a human food made from cultured animal cells was complete. The consultation was with the California-based company UPSIDE Foods, which describes itself as the world’s first cultivated meat company, founded in 2015.

What is cultivated meat?

Cultivated or cultured meat refers to meat that is produced in a laboratory under controlled conditions, using bioreactors (also referred to as fermenters). This process mirrors the manufacturing of biopharmaceuticals – drugs that are made from living organisms. A sample of cells are obtained from an organism, such as a chicken, cow or pig, and grown in the bioreactor, which provides the required nutrients and growth conditions for the cells to replicate.

UPSIDE submitted a review of its safety assessment for the company’s cultured chicken cell material to the FDA in October 2021.

The FDA pre-market consultation is not an approval process – rather it is an evaluation of the safety conclusion reached by the company. In its response letter to UPSIDE, the FDA said, “Based on the information UPSIDE has presented to the FDA, as well as other information available to the agency, we did not identify a basis for concluding that the production process as described in CCC 000002 would be expected to result in food that bears or contains any substance or microorganism that would adulterate the food.” CCC 000002 is the name allocated to the food product and its associated production processes.

“We have no questions at this time regarding UPSIDE’s conclusion that foods comprised of or containing cultured chicken cell material resulting from the production process defined in CCC 000002 are as safe as comparable foods produced by other methods.” 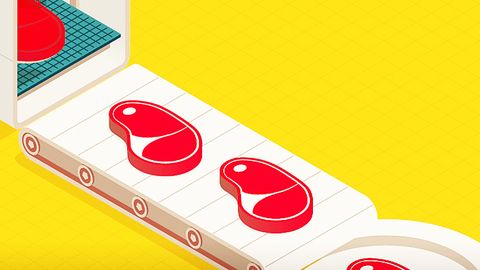 END_OF_DOCUMENT_TOKEN_TO_BE_REPLACED

What’s next for UPSIDE?

Following the announcement, UPSIDE can now transition to the standard process of approvals that conventional chicken products follow, ensuring safe production and handling of its cultivated chicken. It will also need a grant of inspection from the United States Department of Agriculture Food Safety and Inspection Service (USDA-FSIS) for its manufacturing facility, and the final product will require a mark of inspection from the USDA-FSIS before it enters the US market. “As this product comes closer to entering the US market, we are closely coordinating with USDA-FSIS to ensure it is properly regulated and labeled,” the FDA said.

The decision has been described as a “historic milestone” by the Good Food Institute (GFI), a non-profit organization based in Europe that is working to advance sustainable proteins, including cultivated meat. Seth Roberts, GFI policy manager said, “This announcement sends a strong message around the world that cultivated meat will be part of a more sustainable food future.”

Why do we need cultivated meat?

Cultivated meat is perhaps the perfect example of how synthetic biology principles can be applied to real-world problems, including food sustainability and climate change. It’s well established that conventional meat production processes are harming our planet. “From climate change to forest fires to human rights abuses, the global industrial meat industry leaves a trail of destruction all over the world,” says Greenpeace in 7 reasons why meat is bad for the environment. A 2021 study by CE Delft was the first to publish data on cultivated meat’s environmental impact compared to farming practices. It found that cultivated meat might:

Beyond environmental issues, those interested in animal welfare might praise cultured meat for its apparent “meat without slaughter” ethos. However, the cultivation of seed cells in some production lines requires bovine serum, which might be obtained in processes criticized as “inhumane”.

Replacing a portion of livestock agriculture with cellular agriculture could also have negative repercussions on the farming industry and the livelihoods of those in the farming industry, which must be considered. In addition, cultivated meat production processes are complex and cannot yet be scaled-up to match the global meat demand. A result of this might be a considerably high price-tag on cultivated meat products.

The future of cultivated meat markets

The FDA’s announcement implies it will continue to work with other companies in the cultivated meat industry: “The FDA is ready to work with additional firms developing cultured animal cell food and production processes to ensure their food is safe and lawful under the Federal Food, Drug, and Cosmetic Act.”

The GFI praises the FDA’s move and urges the UK government to invest in research and development to “realize the benefits” of cultivated meat production: “As COP27 draws to a close, ministers should be investing in climate solutions like cultivated meat – just as they’ve supported renewable energy – to ensure the benefits are felt here in the UK,” Roberts said.