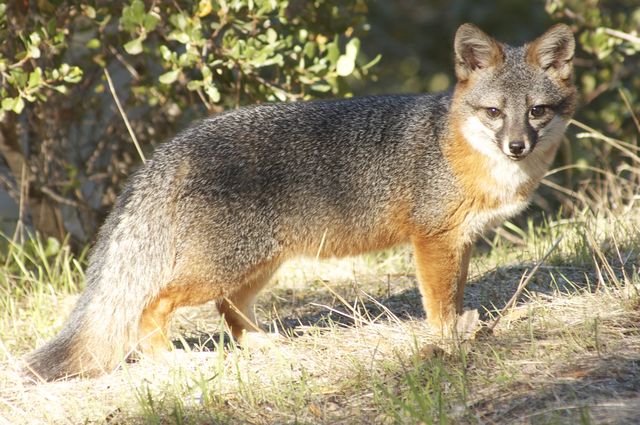 UCLA biologists report in a new study that a species of foxes living on six of California’s Channel Islands have a surprising absence of genetic variation. The research, published in the Cell Press journal Current Biology, provides a complete genome sequence for a small population of the endangered animals, which have been confined to the islands for thousands of years.

The Channel Island foxes are dwarves, two-thirds the size of their mainland relatives. They most likely evolved from gray foxes that were brought to the northern islands by humans more than 7,000 years ago.

“The island fox populations suffer from both a lack of genetic diversity and the accumulation of damaging genetic variants, which are likely to worsen over time,” said Robert Wayne, a professor of ecology and evolutionary biology in the UCLA College. “Our findings emphasize the importance of large population size in order to allow natural selection to operate effectively. It is imperative that we do not let species come to the very brink of extinction, when there are only a handful of individuals remaining, before we intervene to increase their numbers.”

A group of foxes living on one of the islands in particular, San Nicolas Island, has much nearly an order of magnitude less genetic variation than any other low-diversity species, including the severely endangered African cheetah, Mountain gorilla, and Tasmanian devil.

That finding, which was established by earlier research, does not bode well for the foxes, said Jacqueline Robinson, the study’s lead author, a UCLA graduate student in ecology and evolutionary biology. A lack of genetic diversity means that individuals within a population are all equally susceptible to disease, and that the species might not be able to respond to a changing environment, she said.

The research also raised a question that the researchers haven’t yet been able to answer: How have the foxes managed to survive as well as they have?

For example, Robinson said, unlike other species with low diversity, island foxes have not yet been found to suffer from severe signs of inbreeding depression.

The researchers compared DNA samples collected in 1988 from each of the Channel Island fox populations with one from a gray fox from mainland Southern California.

Biological theory holds that small populations of animals will lose their genetic variation, and will accumulate harmful mutations as the normal process of natural selection fails. The UCLA study found that both were true of the island foxes’ genomes.

The researchers write that their new findings should be considered in plans for the foxes’ future, including the possible delisting from endangered species protection for some of their subspecies — a proposal that is currently being considered by the U.S. Fish and Wildlife Service.

A new study has laid out the steps that connect the neuromuscular disorder spinal muscular atrophy (SMA) to the mutations in the gene SMN1 that cause the condition. The research may explain how the mutations affect motor neurons and points the way to a better understanding of SMA.

END_OF_DOCUMENT_TOKEN_TO_BE_REPLACED

In a Phase I clinical trial for patients with advanced solid cancers marked by KRAS G12C mutations, the KRASG12C inhibitor sotorasib (AMG 510) resulted in manageable toxicities and durable clinical benefit.

END_OF_DOCUMENT_TOKEN_TO_BE_REPLACED

Could Psoriatic Arthritis Be Activated by the Same Receptor in Different Patients?

A new study has revealed psoriatic arthritis may be activated by the same trigger in different patients. Researchers identified high levels of a specific receptor in immune cells, giving promising evidence of a single cause for the disease.