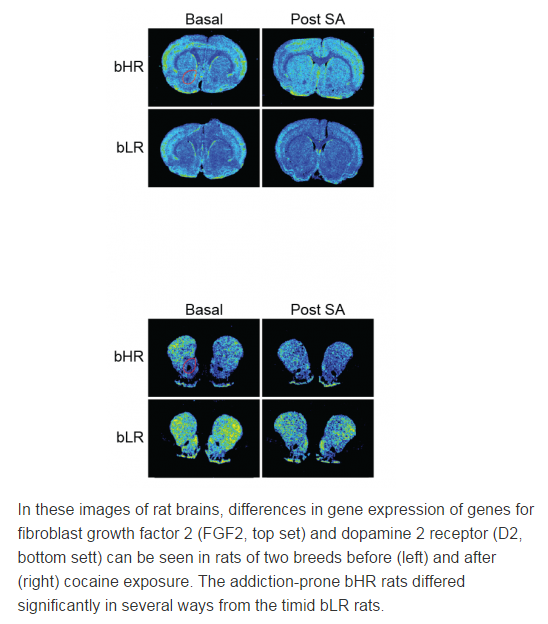 Why does one person who tries cocaine get addicted, while another might use it and then leave it alone? Why do some people who kick a drug habit manage to stay clean, while others relapse? And why do some families seem more prone to addiction than others?

The vulnerability of individuals to becoming "hooked" on drugs may involve specific genetic factors - both inherited and influenced by drug use.

The road to answering these questions may have a lot to do with specific genetic factors that vary from individual to individual, a new study in rats suggests.

Of course, an animal study can’t explain all the factors that contribute to differences in addiction among humans. But the findings reveal new information about the roles played by both inherited traits and addiction-related changes in the brain.

The study was just published in the Proceedings of the National Academy of Sciences by a University of Michigan Medical School team.

It’s the first time scientists have shown in selectively bred animals that the propensity for addiction is linked to differences in expression of genes for specific molecules in a specific brain region. It’s also the first demonstration that a DNA tag called an epigenetic marker can predispose an individual to addiction and relapse.

The researchers looked in rats’ brains for the genetic instructions needed to make a key “pleasure receptor”, called D2, that allows brain cells to receive signals sent by the brain chemical dopamine – or cocaine. They found that more addiction-prone rats had lower levels of D2 instructions to begin with, compared with other rats, in an area of the brain known to play a major role in addiction.

The addiction-prone rats also were more likely to carry a specific mark on their DNA called an epigenetic tag. This tag, called H3K9me3, kept their brain cells from reading the gene for D2 receptors.

But after they became hooked on cocaine, the addiction-prone rats had the same levels of D2 as the less addiction-prone ones. And when the cocaine was taken away for a while, these rats were more likely to relapse to addictive behavior if they had started out with the epigenetic tag that kept their cells from reading the D2 gene.

The scientists found that these “addiction-resilient” rats started out with lower levels of instructions for making a different brain molecule also known to play a role in addiction, called FGF2. They were also more likely to carry an epigenetic mark that kept them from reading the FGF2 gene. And this might have helped protect them from becoming addicted.

“Because we had access to these rats that were bred for certain traits, and were able to control for environmental factors, such as the amount of drug exposure, we could assess differences in the brain both before and after the rats became addicted,” says Shelly Flagel, Ph.D., lead author of the new study and an assistant professor of psychiatry at U-M. “By studying their gene expression and epigenetics, as well as their response to drug availability and drug-related cues, we can link these differences in the brain to addiction-like behaviors, such as relapse. This allows us to hone in on the biology of addiction even further.”

And that kind of understanding could be a model to help the broader understanding of addiction in humans as well, Flagel says. The more that addiction is seen as having biological roots and origins in genetic traits that are inherited through families or amplified by drug taking, the better treatment options and public policy around drugs and drug users can be, she hopes.

A tale of two rat breeds

The findings come from studies of two special breeds of rats. Raised for dozens of generations in the lab of senior author Huda Akil, Ph.D., at the U-M Molecular and Behavioral Neuroscience Institute under carefully controlled conditions, the two breeds act as a way to study the effects of genetic and inherited traits on addiction-related behaviors.

One breed, called bHR for bred high responders, tends to explore and seek novelty. The other, called bLR for bred low responders, does not. In fact, bLR rats often act anxious when presented with new situations, and prefer enclosed spaces even when they can see food in an open area.

The two breeds allow scientists to study the impact of drug use and addiction on gene expression and epigenetics in the nucleus accumbens – the brain’s “pleasure center”, where response to drugs like cocaine occurs. Normally, the dopamine system in this area responds to naturally pleasant experiences and prompts us to pursue them again. It’s as if the drug hijacks the system that fuels normal enjoyment or reward. And that can make the usual goal-driven motivated behavior that’s driven by pleasure go awry.

In the new study, the scientists first trained all the rats to expect to find cocaine in certain places, to poke their nose into a hole to get a controlled dose of it, and to expect it would be available when a certain light was shining. Even the anxious, timid bLR rats learned to take the drug.

Although both groups of rats took the same amount of drug, the two breeds differed dramatically in how likely they were to seek out cocaine repeatedly. The bHR rats were much more likely to keep seeking cocaine, even when it was not available.

After a week without cocaine, bHR rats were more likely to ‘relapse’ after getting an injection of cocaine. After a month with no cocaine, bHRs were much more likely than bLRs to start seeking it again when the light previously associated with cocaine delivery started coming on again. This is similar to what humans recovering from addiction often report: their craving for drugs returns when they see drug paraphernalia or return to a place where they once got or took drugs.

“It is likely that the propensity to seek drugs and become addicted to them involves numerous genes. Moreover, factors beyond novelty-seeking including stress and depression can lead to substance use in some individuals,” says Akil. She, Flagel and their colleagues are now using broad-based genotyping to uncover other genes that contribute to various facets of drug abuse and addiction. These genetic findings will point to potential biomarkers and more targeted treatment strategies for substance use disorders.

Scientists have managed to ascribe an immunological memory function to a subset of cytotoxic NK cells, which have hitherto been regarded as antigen-non-specific. These cells are therefore an interesting target for prophylactic use in the human immune system in the fight against infections and viruses.

END_OF_DOCUMENT_TOKEN_TO_BE_REPLACED

Researchers from the University of Copenhagen have mapped the entire nuclear genome of a sabre-toothed cat. The genetic study reveals new insights about a socially intelligent pack animal, specialized in endurance-based hunting over long distances.

END_OF_DOCUMENT_TOKEN_TO_BE_REPLACED

Trauma Impacts the Metabolism in Ways That Can Be Inherited, New Study Shows

How are signals triggered by traumatic events embedded in germ cells? A new study by Professor Isabelle Mansuy proposes a biological mechanism.

END_OF_DOCUMENT_TOKEN_TO_BE_REPLACED

Can We Engineer an Organism's Metabolism To Be More Resilient?