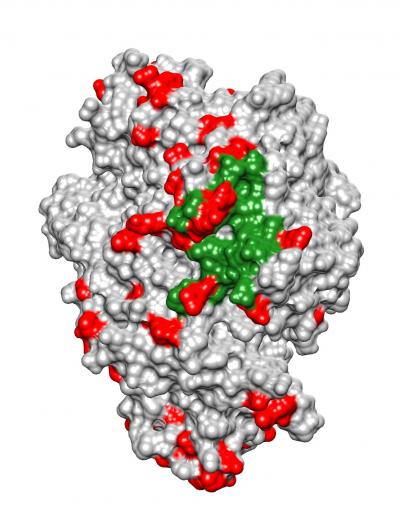 The constant battle between pathogens and their hosts has long been recognized as a key driver of evolution, but until now scientists have not had the tools to look at these patterns globally across species and genomes. In a new study, researchers apply big-data analysis to reveal the full extent of viruses’ impact on the evolution of humans and other mammals.

Their findings suggest an astonishing 30 percent of all protein adaptations since humans’ divergence with chimpanzees have been driven by viruses.

“When you have a pandemic or an epidemic at some point in evolution, the population that is targeted by the virus either adapt s, or goes extinct. We knew that, but what really surprised us is the strength and clarity of the pattern we found,” said David Enard, Ph.D., a postdoctoral fellow at Stanford University and the study’s first author. “This is the first time that viruses have been shown to have such a strong impact on adaptation.”

The study was recently published in the journal eLIFE and will be presented at The Allied Genetics Conference, a meeting hosted by the Genetics Society of America, on July 14.

Proteins perform a vast array of functions that keep our cells ticking. By revealing how small tweaks in protein shape and composition have helped humans and other mammals respond to viruses, the study could help researchers find new therapeutic leads against today’s viral threats.

“We’re learning which parts of the cell have been used to fight viruses in the past, presumably without detrimental effects on the organism,” said the study’s senior author, Dmitri Petrov, Ph.D., Michelle and Kevin Douglas Professor of Biology and Associate Chair of the Biology Department at Stanford. “That should give us an insight on the pressure points and help us find proteins to investigate for new therapies.”

Previous research on the interactions between viruses and proteins has focused almost exclusively on individual proteins that are directly involved in the immune response — the most logical place you would expect to find adaptations driven by viruses. This is the first study to take a global look at all types of proteins.

“The big advancement here is that it’s not only very specialized immune proteins that adapt against viruses,” said Enard. “Pretty much any type of protein that comes into contact with viruses can participate in the adaptation against viruses. It turns out that there is at least as much adaptation outside of the immune response as within it.”

The team’s first step was to identify all the proteins that are known to physically interact with viruses.  After painstakingly reviewing tens of thousands of scientific abstracts, Enard culled the list to about 1,300 proteins of interest.  His next step was to build big-data algorithms to scour genomic databases and compare the evolution of virus -interacting proteins to that of other proteins.

The results revealed that adaptations have occurred three times as frequently in virus -interacting proteins compared with other proteins.

“We’re all interested in how it is that we and other organisms have evolved, and in the pressures that made us what we are,” said Petrov. “The discovery that this constant battle with viruses has shaped us in every aspect — not just the few proteins that fight infections, but everything — is profound. All organisms have been living with viruses for billions of years; this work shows that those interactions have affected every part of the cell.”

Viruses hijack nearly every function of a host organism’s cells in order to replicate and spread, so it makes sense that they would drive the evolution of the cellular machinery to a greater extent than other evolutionary pressures such as predation or environmental conditions. The study sheds light on some longstanding biological mysteries, such as why closely-related species have evolved different machinery to perform identical cellular functions, like DNA replication or the production of membranes.  Researchers previously did not know what evolutionary force could have caused such changes. “This paper is the first with data that is large enough and clean enough to explain a lot of these puzzles in one fell swoop,” said Petrov.

The team is now using the findings to dig deeper into past viral epidemics, hoping for insights to help fight disease today. For example, HIV -like viruses have swept through the populations of our ancestors as well as other animal species at multiple points throughout evolutionary history. Looking at the effects of such viruses on specific populations could yield a new understanding of our constant war with viruses — and how we might win the next big battle.

END_OF_DOCUMENT_TOKEN_TO_BE_REPLACED

A global study of ancient dog DNA, led by scientists at the Francis Crick Institute, University of Oxford, University of Vienna and archaeologists from more than 10 countries, presents evidence that there were different types of dogs more than 11,000 years ago.

END_OF_DOCUMENT_TOKEN_TO_BE_REPLACED

Denisovan DNA Found in the Genome of Early East Asians

In a new study, researchers at the Max Planck Institute for Evolutionary Anthropology in Germany and the Mongolian Academy of Sciences present an analysis of the genome of the oldest human fossil found in Mongolia to date.

END_OF_DOCUMENT_TOKEN_TO_BE_REPLACED

Scientists Analyze Over Half a Million Chemical–Gene Interactions

END_OF_DOCUMENT_TOKEN_TO_BE_REPLACED

Can We Use Vocal Biomarkers To Diagnose COVID-19?

END_OF_DOCUMENT_TOKEN_TO_BE_REPLACED

Why Are Some People Infected With COVID-19 Asymptomatic?