Ruairi is a senior science writer at Technology Networks. He holds a Master's degree in clinical neurosciences from the University of Cambridge and has written for Technology Networks since 2018.
Learn about our editorial policies
The ONWARD ARCIM technology used in the study. Credit: ONWARD)

A targeted stimulation technique that was previously shown to restore movement to spinal cord injury (SCI) patients has now demonstrated an additional benefit – stabilizing often-deadly alterations to blood pressure that occur after an SCI.

The research, published in Nature , was led jointly by labs at the University of Calgary and the Ecole Polytechnique Fédérale de Lausanne (EPFL).

Study co-leader Dr Grégoire Courtine, a professor at EPFL and chief scientific officer at medical technology company ONWARD, explained how SCI patients are put at risk by disrupted blood dynamics: “People primarily focus on paralysis after an SCI but there are a lot of issues with autonomic function. One issue is orthostatic hypotension, meaning when you move up, gravity pulls your blood down, so the blood pressure decreases. Because of the SCI, the brain cannot regulate the vasoconstriction of blood vessels and the blood pressure remains very low. This can tremendously affect [patients’] quality of life… their vision gets blurry and cognition is affected,” [Updated January 28 2021].

The inverse is also true, and SCI patients are at risk of life-threatening events such as strokes when their blood pressure rises. These haemodynamic issues are the leading cause of death in SCI patients.

From mouse to man

Courtine’s team wanted to explore whether the stimulation that had proved so successful in restoring functional ability in SCI could also rescue these blood pressure irregularities. In their study, the team began by examining how blood pressure regulation by the sympathetic nervous system – the so-called “pressor” response – was disrupted by SCI in a pre-clinical mouse model.

By identifying “hotspots” of blood pressure control in the spinal cord, Courtine’s team were able to precisely direct their intervention, a stimulation technique called epidural electrical stimulation (EES). Results showed that by targeting the spinal segments containing the highest density of sympathetic pre-ganglionic neurons (originating in the spinal cord and which modulate the body’s involuntary responses), EES could constrict blood vessels and boost blood pressure.

The team’s previous work on restoring movement after paralysis guided their work in this important pre-clinical stage. Courtine explained, “It’s very important when you want to develop these neuromodulation therapies that you design them to be biomimetics – trying to activate these circuits that are disconnected from the brain in the same way that the brain would do naturally.” The team designed a closed-loop system that would respond to changes in blood pressure elicited by changes in body position and external pressure.

After further confirmatory results in monkeys, the team was able to test the effects of their system on a single human patient, a 38-year-old man named Richi, who was experiencing the symptoms of orthostatic hypotension. Aaron Phillips, an assistant professor at the University of Calgary’s Hotchkiss Brain Institute and study co-lead, explained how orthostatic hypotension could affect patients: “In Richi’s case, and many others, this leads to daily episodes of light-headedness, dizziness and cognitive decline that’s often termed “brain fog” by the patients themselves.”

The team surgically positioned an electrode array along Richi’s vertebrae, guided by computer simulation that predicted optimal placement. Activation of the array quickly raised Richi’s blood pressure and circulating levels of the hormone noradrenaline, an indicator of sympathetic nervous system activation. As Phillips elaborated, Richi profoundly benefited from the technology: "He reports a 90% improvement in his quality of life and a complete absence of orthostatic hypotension since he has been using the stimulation device, to the point that he has been able to stop using all the drugs and other therapies he was trying to manage his blood pressure.”

One way in which the technology differed from Courtine’s earlier work with movement rehabilitation was that, whilst patients in the previous study maintained benefits to movement long after the stimulation therapy had ended, here Richi’s blood pressure lowered once the stimulation was ceased. Courtine nonetheless points to promising preliminary data that the stimulation may help the opposite problem of post-SCI hypertension or raised blood pressure. This suggests that plastic changes are happening at some level in the body in response to the stimulation. 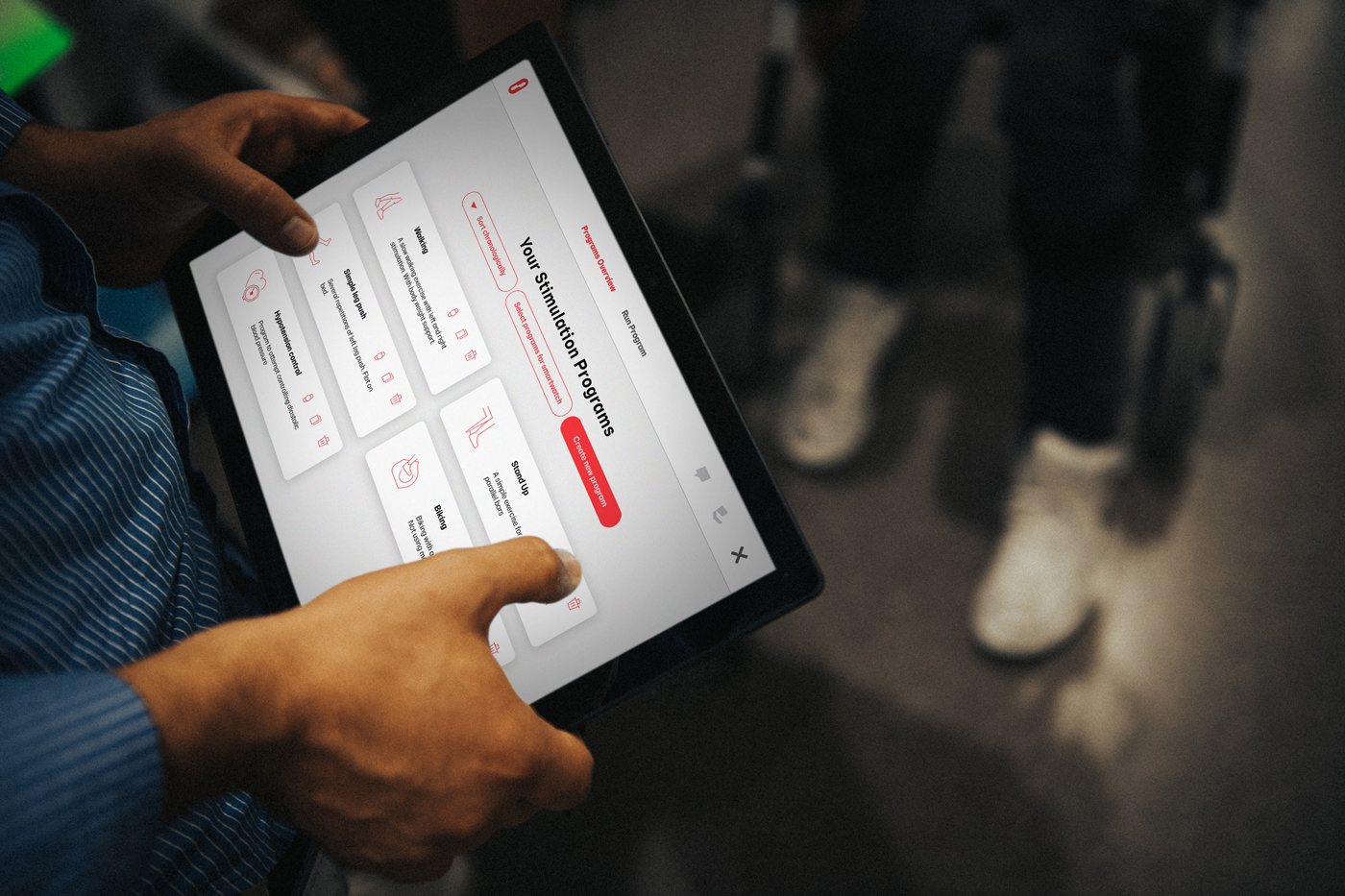 The ONWARD ARCIM device can be controlled with a tablet. Credit: ONWARD

The tremendous advantage of this technology, Courtine explains, is that it is not reliant, as many current interventions are, on infusions of drugs that must be carefully measured and released in exact doses to avoid tipping patients’ blood pressure towards extremes. “We believe, in the near future, because of the sheer simplicity of the approach, we will be able to, for the majority of individuals suffering from orthostatic hypotension, alleviate this issue,” said Courtine.

The technology is now moving into a clinical trial, which Courtine commented on in a press release: “We look forward to working with ONWARD to conduct clinical trials in humans so this approach can be translated into a viable therapeutic option for people with SCI.”