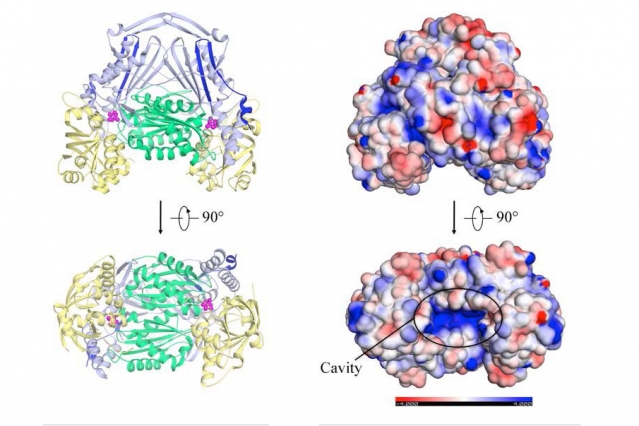 Scientists at MIT and the University of São Paulo in Brazil have identified the structure of an enzyme that could be a good target for drugs combatting three diseases common in the developing world.

The enzyme, fumarate hydratase (FH) is essential for metabolic processes of parasites that are responsible for the spread of three diseases: Leishmaniases, Chagas disease, and sleeping sickness. As such, understanding the enzyme’s structure could help researchers figure out how to inhibit FH enzymes, thereby providing new medical therapies.

“This enzyme is really critical for the metabolism of organisms like Leishmania major,” says Catherine Drennan, an MIT professor whose lab hosted the research. “If you knock it out, the organism should be dead.”

Leishmaniases are a group of diseases varying from severe skin ulcers to debilitation of internal organs, and are present in Asia, Africa, the Americas, and Southern Europe. Chagas disease, located mostly in Latin America, causes cardiac and intestinal complications, and can lead to heart failure. Sleeping sickness affects humans and other animals and is an often-deadly disease concentrated in Africa.

The study of FH began at the University of São Paulo, where researchers Patricia R. Feliciano and M. Cristina Nonato made important progress on studying Leishmania major FH. Feliciano then moved to MIT to complete the analysis of the enzyme structure with Drennan, a professor of chemistry and biology, and an investigator with the Howard Hughes Medical Institute.

“The exciting thing about this is thinking that my work could help people who have those diseases,” says Feliciano.

The paper, “Crystal structure of an Fe-S cluster-containing fumarate hydratase enzyme from Leishmania major reveals a unique protein fold,” is being published today in Proceedings of the National Academy of Sciences (PNAS). The authors are Feliciano, Drennan, and Nonato.

Significantly, the Leishmania major FH enzyme has a protein architecture — it vaguely resembles a human heart in appearance — that is distinctive from the structure of human fumurate hydratase.

“When we looked at the structure for the first time, it was like, ‘Whoa, it is completely different from the human FH enzyme,’” says Feliciano.

“The fact that it is a novel fold does add to the idea that this is a good drug target,” Drennan adds. “It has a lot of potential.”

Here’s why: The distinctive structure of class I FH makes it possible that drugs could target the parasite variant of the enzyme alone, while leaving intact the functionally equivalent enzymes that humans use.

“It’s an enzyme that does the exact same thing, but it’s a completely different enzyme,” Drennan explains. “That’s what makes this such an exciting target.”

The finding stems from work Feliciano started doing nine years ago in Brazil in Nonato’s lab, but was not able to complete at the time, in part because of difficulties accessing the right equipment.

In 2012 Feliciano arrived at MIT, where the Drennan Lab has tools that let researchers form crystals of proteins under anaerobic (oxygen-free) conditions. Having formed a crystal of the Leishmania major FH enzyme, it still took Feliciano several months to completely map out the enzyme’s structure, partly because of its complexity, she notes.

Drennan emphasizes the complementary aspects of the research arrangement, with the research problem identified and important groundwork accomplished in Brazil, while MIT provided the right tools to solve the enzyme structure, and with the results hopefully having long-term application in Latin America and Africa.

For that matter, Drennan says, the nature of globalization means diseases can spread worldwide in relatively short timespans these days. That means the need to find remedies for Leishmaniases, Chagas disease, and sleeping sickness is potentially global, too.

“I think it’s important to reflect on these health issues, and more people in the U.S. need to be aware of these diseases,” Drennan says. “The world is getting to be a smaller place.”

END_OF_DOCUMENT_TOKEN_TO_BE_REPLACED

Researchers have shown that Cisplatin induces senescence of peripheral neurons through overexpression of the p21 protein, which would explain the neuropathy associated with this treatment.

END_OF_DOCUMENT_TOKEN_TO_BE_REPLACED

Aurora-A kinase is a protein that causes extensive damage to cells of the body and is known to trigger the development of leukemias and many pediatric cancers, such as neuroblastoma. Researchers at the universities of Würzburg and Frankfurt have now developed a drug that can disarm Aurora.

END_OF_DOCUMENT_TOKEN_TO_BE_REPLACED

How To Optimize Your Cryopreservation

END_OF_DOCUMENT_TOKEN_TO_BE_REPLACED

A Comprehensive Toolkit for SARS-CoV-2 Research

END_OF_DOCUMENT_TOKEN_TO_BE_REPLACED

Beyond SOPs – Exploring the Rigor and Requirements of Analytical QBD