A Johns Hopkins engineer, supported by a major NIH grant, is leading a multi-institution team that wants to keep bacterial infections from dodging the dwindling arsenal of drugs that destroy the deadly microbes.

The group’s goal is to build palm-size devices that can quickly figure out which germ is causing a hospital-linked infection and then identify the right drug and dosage needed to kill the bacteria.

Current testing methods can take up to three days to get these answers. But when a hospital patient is too ill to wait that long, physicians often make educated guesses and prescribe broad-spectrum antibiotics. These may help the patient, but the medicine can also allow some bacteria to adapt and survive, leading to the growth of antibiotic-resistant microbes.
If present trends continue, public health experts fear that more and more life-threatening infections will soon be able to shrug off the shrinking number of drugs that can be used to kill them.
“To keep this from happening, we need to be faster and more precise in the way we diagnose and treat people with bacterial infections,” said Tza-Huei (Jeff) Wang, a Johns Hopkins professor of mechanical engineering who is leading the team that will build the new microfluidic testing devices. “Instead of waiting three days to figure out what the infection is and what’s the best drug to treat it, we believe our technology will deliver both answers within just three hours.”
He added, “That should lead to more effective treatment and a lower risk of promoting antibiotic resistance.” 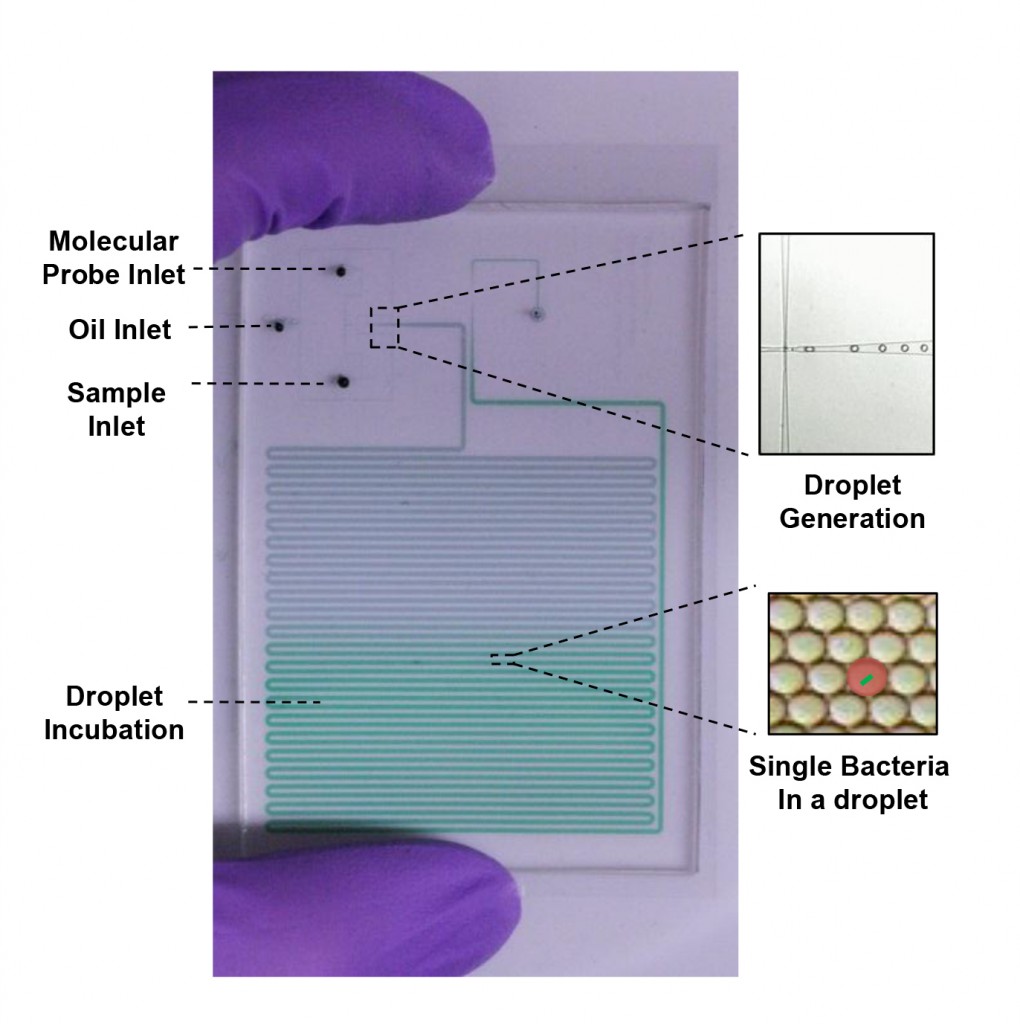 This illustration depicts a microfluidic chip for bacterial detection and drug testing in picoliter-sized droplets. Graphic by Jeff Wang Lab/Johns Hopkins University.
Wang’s project was one of nine antimicrobial resistance diagnostic projects selected for funding recently by National Institute of Allergy and Infectious Diseases (NIAID), part of the National Institutes of Health. The team will receive $1.26 million for the first year of a five-year effort that is expected to ultimately receive nearly $6 million in NIAID support.
NIAID officials said the new grants were aligned with a key goal of with President Barack Obama’s recent National Action Plan for Combating Antibiotic-Resistant Bacteria.
The new funding program was launched to help researchers develop new tools to detect hospital-associated pathogens. For more than 80 years, antibiotics have helped patients ward off infections, but existing drugs are becoming less effective and few new ones are being developed. Because of this, each year in the United States more than 2 million people develop antibiotic-resistant infections, and at least 23,000 die as a result, federal health officials say.
“If this trend continues,” Wang said, “we are at risk of going back almost a century to a time before the first antibiotics were introduced.”
His team will try to keep this from happening. The group will focus on fighting the bacteria linked to urinary tract infections, but Wang said the same technology should be useful in identifying and treating of other infections as well, including sexually transmitted diseases.
The project will draw on Wang’s expertise in working with microfluidic “lab on a chip” devices. These platforms feature extremely tiny channels through which liquids and microscopic organisms can be manipulated and studied. One module will be designed to break down single cells of infectious bacteria and enclose their genetic material within tiny droplets of liquid. The team members will then attach fluorescent probes to the genetic material to enable quick identification of the infection.
The second module will be designed to test bacterial cells within similar droplets to determine which medicine will most effectively kill the microbes. It will also work to pinpoint the precise drug dosage needed to inflict a fatal blow.
These two modules, Wang said, could be connected and still fit in the palm of a hand, set up to identify the pathogen and find out how to destroy it within three hours.
One of his partners in the project will be co-principal investigator Joseph C. Liao, a Stanford University urologist who will help validate that the technology works on bacteria associated with urinary tract infections. In addition, researchers from the University of Arizona will assist in developing the second microfluidic system to identify the proper antibiotic and dosage. Partners from GE Global Research will provide advice how to design the devices for eventual commercial production and widespread use.
The project is being funded by NIAID Grant Number 1 R01 AI117032-01.
In addition to his primary Johns Hopkins appointment in the Whiting School of Engineering’s Department of Mechanical Engineering, Wang also is affiliated with the university’s Department of Biomedical Engineering, its Institute for NanoBioTechnology and its Sidney Kimmel Comprehensive Cancer Center.
Related Topic Pages
Infectious Diseases
The Immune System
Advertisement
Chosen for You
App Note / Case Study

An Integrated Multiomic Approach for the Diagnosis of Metabolic Diseases

Top Considerations for Choosing the Best Components for Your Diagnostic Kit

Unravelling the Myths of Laboratory Automation