Complete the form below and we will email you a PDF version of "What Makes the Human Brain More Complex?"

The analysis of the human brain is a central goal of neuroscience. However, for methodological reasons, research has largely focused on model organisms, in particular the mouse. Now, neuroscientists gained novel insights on human neural circuitry using tissue obtained from neurosurgical interventions. Three-dimensional electron microscope data revealed a novel expanded network of interneurons in humans compared to mouse. The discovery of this prominent network component in the human cortex encourages further detailed analysis of its function in health and disease.

At first glance, brains of mouse and human are surprisingly similar: the nerve cells that form our brains have very similar shapes and properties, the molecular mechanisms of electrical excitation are highly conserved, and many biophysical phenomena found in other species seem to also apply to human brains. “So, is it primarily the fact that our brains are 1,000-fold larger, house 1000-fold more nerve cells that allows us to play chess and write children’s books, which mice arguably cannot do?”, asks Moritz Helmstaedter, director at the Max Planck Institute for Brain Research (Frankfurt) who led the new study published on June 23 in the journal Science.

By analyzing the neuronal networks in mice, monkeys and humans and mapping their complete structure in biopsies of brain tissue, so called connectomes, Helmstaedter and his team have discovered that human cortical networks have evolved a novel neuronal network type that is essentially absent in mice. This neuronal network relies on abundant connections between inhibitory interneurons. Using biopsies from neurosurgical interventions, performed by neurosurgeon Hanno-Sebastian Meyer and his team at TU Munich, the researchers applied 3-dimensional electron microscopy to map about a million synapses in human brain samples. Their data revealed, in humans, an unexpected bias of interneurons (enriched in humans) connecting with each other, while the innervation (synaptic connections) to principal neurons largely remained similar. “This suggests to us an almost ten-fold expansion of an interneuron-to-interneuron network”, says Sahil Loomba, one of the studies’ lead authors.

Guards in the brain

“Interneurons make about a fourth to a third of cortical nerve cells that behave in a very peculiar way: they are highly active, however, not to activate other neurons, rather to silence them. Just like kindergarten caretakers, or guards in the museum: their very laborious and highly energy consuming activity is to keep others peaceful, quiet”, explains Helmstaedter. “Now imagine a room full of museum guards, all mutually silencing each other. This is what the human brain has developed!” 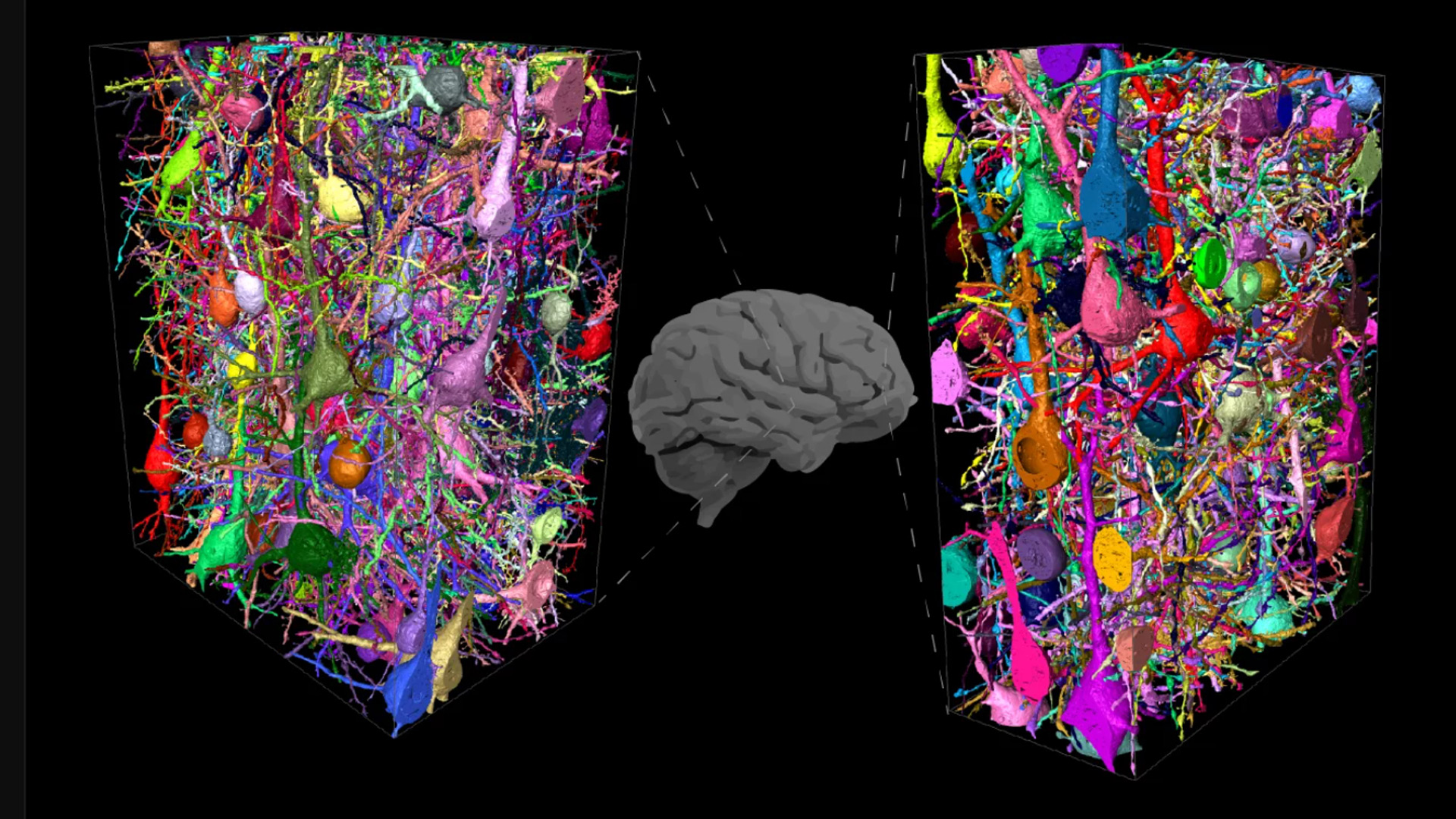 But what could this mean? Theoretical work has suggested that such networks of silencers can prolong the time over which recent events can be kept in the neuronal network: expand the working memory. “In fact, it is highly plausible that longer working memory will help you deal with more complex tasks, expand your ability for reasoning”, says Helmstaedter. The new discovery suggests a first clear network innovation in humans that deserves intense further study. He adds: “It could also be a site of pathological change, and must be studied in the context of neuropsychiatric disorders. And last but not least: none of today’s main AI methods uses such interneuron-to-interneuron networks.”