Complete the form below to unlock access to this Audio Article: "Adjuvanted HIV Vaccine Induces Broad Antibody Responses in Primates"

Why HIV has proven challenging for vaccine development

Despite several decades of research, a vaccine for HIV has remained out of reach. The virus is clever – it can evolve to avoid immune responses, meaning many different strains now circulate across the globe.

Compared to other infectious pathogens, HIV also integrates into the host’s genome very quickly – approximately 72 hours after transmission. “By the time a vaccine-primed secondary immune response to HIV develops, an irreversible infection has occurred,” wrote Dr. Barton Haynes, Frederic M. Hanes distinguished professor of medicine and professor of immunology at Duke University School of Medicine, in a commentary piece addressing why we have several SARS-CoV-2 vaccines, but no HIV vaccine.

What is HIV Env?

The HIV Env binds to CD4, a cell surface-associated receptor and a coreceptor (either CCR5 or CXCR4), inducing a conformational change which eventually causes the virus to fuse with the plasma cell membrane, delivering the viral genome into the cell. The HIV Env glycoprotein is the target of HIV neutralizing antibodies.

A multi-pronged approach for vaccine development

During the 1990s, it was discovered that some HIV patients develop broadly neutralizing antibodies, or bnAbs, that – as the name suggests – can neutralize a variety of viral strains. Developing a vaccine that induces bnAbs is a key goal for HIV research, but it is not without its challenges. 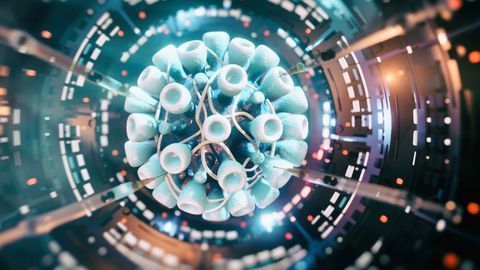 END_OF_DOCUMENT_TOKEN_TO_BE_REPLACED

Researchers have been exploring novel strategies to boost the immune response initiated by HIV vaccines, such as the inclusion of adjuvants or developing a vaccine that closely mimics proteins in the HIV Env.

What is an adjuvant?

In a novel study, Haynes and colleagues tested both approaches.

Previously, a patient living with HIV CH505 was found to develop two bnAb lineages over a six-year infection period. Vaccines based on the CH505 virus Env are therefore considered “promising HIV vaccine strategies” and have been shown to elicit bnAbs in rabbits. Haynes and colleagues believed that this data warranted further exploration in primate models.

The researchers developed a stabilized HIV CH505 (Env) trimer that was also formulated with an adjuvant – a toll-like receptor (TLR) 7/8/ agonist called 3M-052. TLR agonists have been used as adjuvants across several vaccines, including those against the hepatitis B virus, Epstein–Barr virus and varicella zoster virus.

“The responses are limited to the same strain of SHIV as the envelope – so called autologous neutralizing antibodies. These antibodies can be the first type of antibody induced in a broad response,” Haynes described. “So, this could be viewed as a first step. We also found that the serum antibody levels needed for protection were quite high – setting a high bar for protective HIV vaccines.”

Haynes and colleagues have planned clinical trials to investigate whether their vaccine candidate can boost a similar vaccine that is based on the same region of the HIV Env. Their aim is to see whether neutralizing antibodies – broader than those observed in this trial – can be induced.

“This is the most difficult vaccine problem of all tried to date,” Haynes said. “My hope is that current studies identifying the specific steps needed for broadly neutralizing and protective antibodies will teach us not only to make a successful HIV vaccine, but also teach us how to engineer the immune system for making many difficult-to-make vaccines as well as turning off undesired antibody responses in autoimmune diseases,” he concluded.