Why Do Some Vaccines Create Long-Lived Responses? Ask the Researcher

Complete the form below and we will email you a PDF version of "Why Do Some Vaccines Create Long-Lived Responses? Ask the Researcher"

Vaccines protect against pathogens by stimulating the production of antibodies, which bind to specific target sites on foreign substances – neutralizing or clearing them. While some vaccines can induce long-lived immune responses, others require multiple doses, or boosters, to maintain protection.

The antibodies required for sustained protection are produced by a type of immune cell known as a long-lived plasma cell. While scientists have understood these cells to be important for many decades, exactly how and when they are generated has remained elusive.

Researchers from Monash University’s Immune Memory Laboratory, led by Dr. Marcus Robinson and Professor David Tarlinton, recently published their work using a genetic system to “map” the plasma cells in mice. The system – called timestamping – allows scientists to effectively mark the plasma cells present at a specific time-point after vaccination. Later, they can return to study the cells that have survived – the “long-lived” plasma cells. 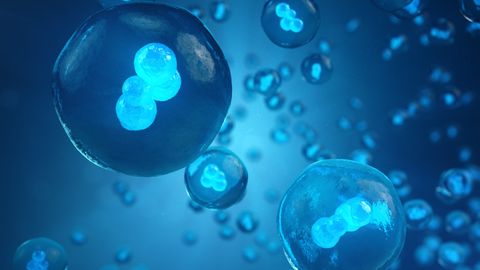 Why Do Some Vaccines Create Long-Lived Responses and Others Don’t?

END_OF_DOCUMENT_TOKEN_TO_BE_REPLACED

The Monash University team administered an aluminum-based vaccine, which targets a model antigen called nitrophenyl (NP), to explore and track the immune cells produced. Using timestamping they could monitor in real-time how these cells are stored in the bone marrow – at a rate of one cell per hour – for weeks post-vaccination.

In this Ask the Researcher, we spoke with Tarlinton to learn more about the method and its initial testing. The system, says Tarlinton, “can inform our understanding of how the recruitment of long-lived plasma cells occurs.”

Molly Campbell (MC): For our readers that are unfamiliar, what did we already know about long-lived plasma cells prior to your study?

David Tarlinton (DT): We knew that after most immune responses, including all vaccinations, the body keeps representative plasma cells from that response for long-term storage in the bone marrow. We knew that some of these bone marrow resident plasma cells could survive for decades, secreting high-affinity antibodies that provide long-term protection against repeated infection from the same pathogen. We knew how the plasma cells were made – and how they moved around the body – but we didn’t know when or for how long during the response these cells were recruited into the long-lived population.

MC: Can you provide examples of vaccines where plasma cells are known to “stick around” vs those that disappear after just a few months?

DT: Measles vaccination uses an attenuated strain, and a single shot typically provides lifelong protection. In fact, one study estimated that most measles-specific plasma cells would survive more than three thousand years! Tetanus and diphtheria toxin vaccine-generated plasma cells last around a decade, which is why we need boosters about every 10 years. In contrast, influenza and SARS-CoV-2 vaccines seem to generate protection that wanes in 3–12 months – so not very long-lived at all. That is one of the reasons why a yearly booster at the start of the flu season is currently recommended to protect from these infections.

MC: Timestamping labels all of a particular cell type at a given time, enabling researchers to follow their survival and location, and track them through any changes that they may undergo. Can you explain how the timestamping system works in the context of your study?

DT: In our case, we focused on plasma cells. First, by gene targeting, we replaced one of the copies of the gene encoding B-lymphocyte-induced maturation protein 1 (BLIMP1) protein. The gene encoding BLIMP1 is critical for plasma cell development and is expressed in all plasma cells all the time. We replaced it with a form of the Cre recombinase enzyme that can be activated by the drug tamoxifen (Tam) in mice.

In summary: when we dose our timestamping mouse, all of the plasma cells in the mouse at that time turn on human CD4. As the mouse ages, its plasma cells die and are replaced by new ones. In the timestamped mouse this means that old, human CD4+ plasma cells are replaced gradually by new, human CD4- ones. In our experiment, we administered Tam treatment at different times post-immunization and then put the mice back on the shelf until all were 10 weeks after the immunization.

When we looked at each mouse for plasma cells made in response to the immunization. We checked to see if the cells had been made before or after the timestamp, which told us their age group (older or younger than the time of the stamp). By doing the timestamp at regular periods after immunization, we built up a map of when the plasma cells that persisted in the mouse for a long time had been made, and it turned out to be a regular production line.

MC: Can you explain which vaccine(s) you tested in the mouse models in this study?

DT: The most common immune-activating substance used in vaccines is a substance called alum. We used an alum-based vaccine targeting a model antigen, called nitrophenyl (NP), to study what happens when these vaccines are directed against foreign targets. The NP was coupled to a protein called keyhole limpet hemocyanin to allow NP-specific B cells – the cells that are the precursors of plasma cells – to obtain directive signals to differentiate into plasma cells from accessory cells called T helper cells. We haven’t studied other vaccines yet, but it’s on the cards.

MC: What are the “take-home” findings from your research?

DT: There are two take-home messages, one immediate and one for the future. The “now” message is that the benefits of an immune response to infection or vaccination keep accruing the longer it goes. We have shown that – more or less every day – our immune system is “banking” a few of the specialized cells it has made that secrete the protective antibodies that make us immune. And importantly, the quality of these cells also gets better with time so we wind up with a collection of cells that comprises the “good, better and best” antibody-secreting cells targeting whatever the immune challenge was.

The second, longer-term message is that our understanding of the intricate processes of an immune response is progressing in leaps and bounds. This means that our ability to guide a response, any response, to the best possible outcome is getting better. Our discoveries, with those from our colleagues, will help in planning how vaccines should be made and given in terms of dose and boost interval, to achieve life-long protection every time.

MC:  What are some of the remaining “unknowns” about long-lived plasma cells, after this study? How do you propose we might look to study these?

DT: One of the big remaining questions is how the cells are retained – what is special about the long-lived plasma cells relative to all the others that survive for shorter times?

It’s almost as if there is competition in the bone marrow, so we’re interested to learn if some of the survival genes associated with plasma cell longevity provide a competitive advantage for retention in bone marrow or capture of survival cues.

MC: Are there any limitations to your work that you wish to highlight?

DT: The main limitation is that we have studied a single target in a vaccine-driven immune response. In our next steps, we will need to show whether the same rate of one cell per hour holds true for all specificities. It might be that there is something specific about a vaccine or infection that can modulate this outcome and lead to a higher accrual rate.

MC: How are you looking to advance this research?

DT: We want to know if the situation is the same for other vaccines and live infections. We think that they will follow the same accrual pattern, but pathogens are much more complex than the single target we’ve studied here. This means that there may be another layer involved beyond what we have shown, and we’re interested to dissect it with the same level of detail. We also want to extend the study to other vaccine targets, so will work on both live infections and vaccines targeting SARS-CoV-2, influenza and papillomaviruses next.